The presentations in this category are factual reports and should be taken literally and at face value. Although I have presented other works that are parody or satire, The Huntsville Neo-Nazi Consortium is not such a work. The events are real, and the victims are real, and the injuries are real.

Loretta Spencer, former mayor of Huntsville, was one of several outsiders who Lewis J. Morris Sr. allowed through the front doors of Madison Pike Elementary school to abuse and proselytize students. While this activity doesn’t sound very injurious at face value, it must be placed in the context of the brainwashing and indoctrination that has been previously exposed, and that resulted in the systematic execution of Huntsville Police Officer William Eric Freeman, and the “acting out behavior” of Art Stogner. 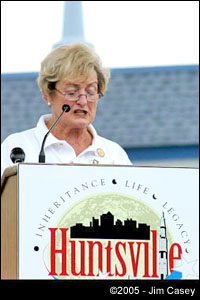 The individuals engaged in that child molestation each played a separate role, adding one component of the larger conspiracy at a time. Loretta’s big mantra has always been “teamwork” as though a little coaching is all she was doing. For some children, maybe that’s all she did, for others who were more overtly attacked both psychologically and physically, her participation was injurious and devastating.

While Loretta Spencer, as mayor of Huntsville, was ultimately not much more than a puppet of larger and more powerful influences, she also had her own personal motivations and agenda in exploiting children. Even as an adult, I’ve seldom met any woman who seemed to have a deeply ingrained and abiding hatred of men. It would seem she fooled the public, but I imagine the people who worked for her eventually could see her true colors. I’ve always wondered what her daddy did to her, and I’ve always felt sorry for her in spite of the fact that she was a vitriolic monster who deliberately injured kids.

Loretta was in fact largely motivated by the extremist in the feminist movement. Most folks are familiar with the highly charged rhetoric in the abortion debate. Pro-choice women are often referred to as “femi-nazis” by pro-life advocates. While the rhetoric is sincere in it’s own context, few would expect that “femi-naziism” would extend beyond the abortion debate to actually include holocaust, genocide, eugenics, and ethnic cleansing – of people already born.

Many people today, similar to Loretta, have in fact found new motivation to reconsider those concepts which have previously been thought of as heinous, barbaric, and reprehensible because they believe in the false panacea that human genomics attempts to promise. They believe in the possibility of ending cancer, Parkinson’s and other debilitating illnesses through genetics therapy – or engineering. Unfortunately, since the political pundits have no intestinal fortitude, the public debate over the ethics and morality of what will eventually become state sponsored genocide and ethnic cleansing, hasn’t even begun.

Sadly, Loretta Spencer is not one of those whose motivation’s are primarily based in the well being of mankind. Her track record of child molestation reveals that she would gladly exploit genomics for her own perverted sense of power and control, and of course for the potential economic gains – which ultimately will not only include health benefits, but also genetically engineered people to fit an efficient business model – and even extermination.

Fortunately, Loretta Spencer has left the public stage, and now is nothing more than a pitiful, hate filled old woman – although, she certainly has left a legacy of injury and damage. Unfortunately, there are far more than I could have imagined fifteen years ago when I first exposed Loretta, that are ready to step in and continue to advance her hate-filled, racist, fascist agenda.