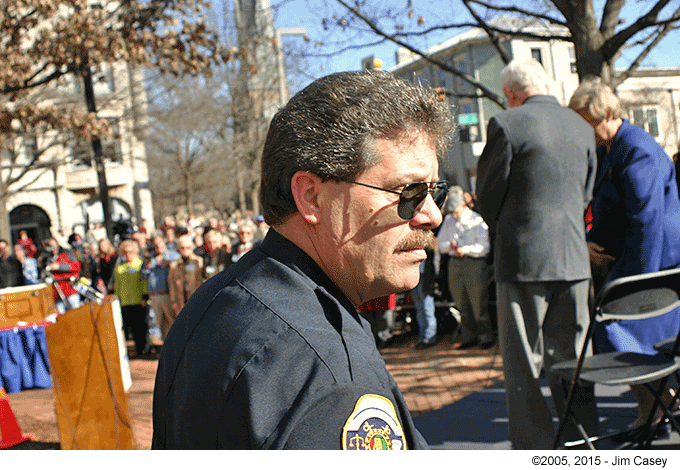 I took this photo of Glenn Koch on January 20, 2005 at the City of Huntsville Sesquicentennial celebration. While the celebration included several events throughout the year, on this day a time capsule that had been buried on the Madison County Courthouse square was unearthed for reminiscence and for all to see.

As if on cue and to echo the reverberations from the McBoom Heard Around The World, posted here just two days ago on December 23rd, Police Officer Glenn Allen Koch, Sr. passed on that same day. His obituary appears in today’s Huntsville Times online, but doesn’t offer any information as to his cause of death. It does reveal that Glenn retired from the Huntsville Police Department in 2013 after 41 years of service.

For those non-the-wiser, “Koch” is pronounced like the popular soft drink “Coke” and is a double-entendre whose meaning is defined most literally as “coal” not unlike what you burn in a bar-b-cue grill, but is also used to refer colloquially to the Human “coke” machine comprised of individuals involved in the seedy underworld of organized crime included the corrupt small business owners, drug dealers, human traffickers, child molesters, junkies, prostitutes, pimps, sex-slaves, their victims – along with the unconstitutional neo-nazi cult practices of eugenics, ethnic cleansing, genocide, and holocaust etc. The idiom is also sometimes used as a reference to the WWII holocaust death camps – where human beings were literately burned to death like human coal.

I’d known Glenn Koch for more than 40 years, although our adult acquaintance was always based on business, beginning when I worked as a manager at a local Burger King where I sometimes required the assistance of law-enforcement to quiet the restaurant on rowdy high school football nights, later when I worked as a supervisor at the Huntsville Depot museum where he moonlighted at various events held there, and the last time that I saw him was when he worked security for the 2005 Huntsville Sesquicentennial where I was working as a journalist for this website – hence the photo above.

Go. To. Hell.
However, Glenn Koch was one of many who participated in the abusive and exploitative system of child molestation and indoctrination that occurred at Madison Pike/Morris Elementary school. He showed up in full uniform, and although he would have just been a rookie cop at that point, he identified himself as the Warrant Officer. Koch played the good cop in the cliched “good cop bad cop” routine attempting to gain information in regard to the already discussed revelations about the conspiracy to kill another cop, William Eric Freeman. As previously discussed, I didn’t know who delivered that information, and Koch was engaged in highly abusive tactics that I now realize were actually intended to obscure and cauterize any recollections of that information – which it did. However, at the time my ten year old self quickly became known for telling him, and others who were abusive to “Go. To. Hell.”

Of course, any mature human being would realize that Koch had no business engaging in a child molestation ring, and shouldn’t have been in that school to begin with. His very appearance suggests he already had knowledge about the conspiracy to kill Freeman, and that would be consistent with my long held belief that the conspiracy was actually orchestrated from within the Police Dept. by other officers who wanted to offer their own sacrificial squirrel(s) to the “coke” machine, or as part of their own cult religious communion.

Glenn Koch’s participation begs mention of some others who were directly involved in the Huntsville City Schools human trafficking ring. As noted: Glenn Watson, Loretta Spencer, Mary Jane Caylor, Roger Cooper, Walter Nunn, Carol Simon, and Marshall Herff Applewhite, all made appearances and engaged in abuse and indoctrination to a greater or lesser degree, along with a lot more who were not identifiable at the time.

The Huntsville community is obsessed with aliases, fones, and signing ones name by their actions or with their job, to the point that negative sub-plots are often driven in that pursuit and by those who ought not to be doing so – and sometimes in direct conflict of their responsibilities.

Another case in point where name value also certainly did drive negative consequences, is when Rex Reynolds was promoted to Chief of Police. During his tenure in office about three dozen police cruisers were inextricably involved in various “wrecks” that totaled the vehicles like crumpled up “Reynolds” wrap aluminum foil. Anyone paying attention at the time would have to have been blind not to see it, or acting dumb. It may seem ridiculous to suggest, but I doubt that after calculating what must have been close to two million dollars worth of damage to police vehicles, that city leaders spent much time laughing. Soon, Reynolds was promoted out of the public eye.

Leaving it there, and with condolences to the family, while noting the immediate timing, and recognizing that the Lee High Bus massacre was one helluva chunk of coal – I felt I should include these observations as a point of record.

Merry Christmas to all, and to all… good night.