I fail to understand why Donald Trump’s no fly list, which is aimed at foreign Muslim’s who present a higher likelihood of threat (and as non-US citizens are not even protected by the US constitution), is more unconstitutional, or is less American, than Barack Obama or Hillary Clinton, who want to expand the already illegal and unconstitutional “no-fly list” as it already applies to US citizens, to include more US citizens, without constitutional due process, as a way to deny the constitutional right to gun ownership.

And shame on the Supreme Court. The Chicago suburb has no authority to deny constitutional rights. The right to own guns is not about hunting, it isn’t even about simple self-defense as some now attempt to redefine the narrative. The right to own guns is about the right to engage in war-like responses to radical caliphates who might take over government. WTF do they think “militia” means anyway? I don’t think that should include a nuclear device, but a sensible place to draw that line would be a reflection of what police commonly have – probably to include automatic weapons.
The Supreme Court has already been radicalized, thanks in no small part by W’s appointment of Obama Republican radical John Roberts.

911 changed absolutely nothing. Tyranny is always based on economics. Disarming Chicago, and the United States, enables continuation of the economic tyranny that is the underlying cause of domestic violence to begin with.

In the most wealthy, most efficient, most industrially advanced nation the world has ever known – economic tyranny is inexcusable and draconian.

The mass shootings and the San Dino events ARE exactly the same pattern, just a different motif. They are all unification, “communion,” events all planned decades in advance. They are all barbaric, contra-indicated, and NOT Christian. Arguably then, all mass shootings, the Lee High bus massacre, the murders of Christinapher Stevens’s, and many other violent community events defined as “our 911” are “Islamic” extremism by definition.

Is your cult “communion” really worth dissolving the US constitution and creating an official caste and slavery system run by aristocratic plantation bosses? That is EXACTLY what is happening. 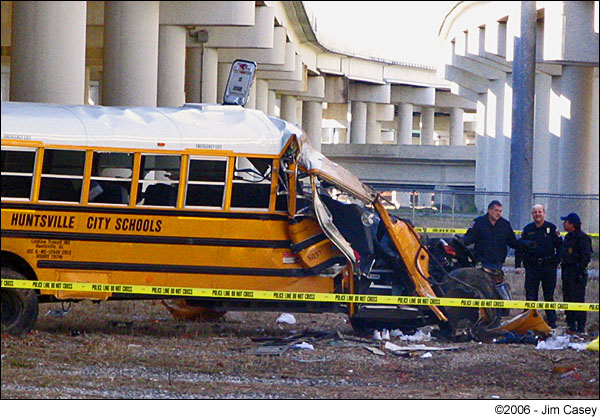 
In Huntsville, the Lee High School Bus Massacre that happened on November 20, 2006 is exactly the type of “911” domestic terrorism event that is accepted as an “accident” because of the cultism involved. Never-the-less, this type of event cultivates acceptance of the government radicalization that we are now seeing. ALL domestic terrorism events must be recognized for what they are and investigated by Homeland Security in order to end the bloody crusades that underlie the events.