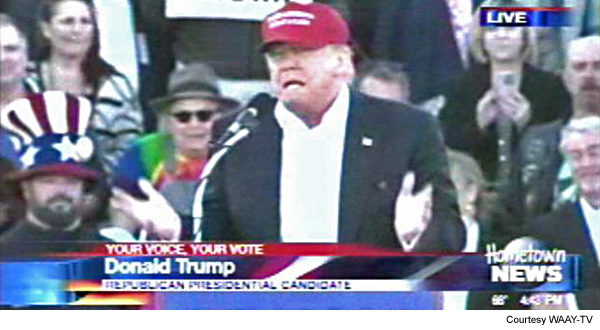 Donald J. Trump explains what is going on at the ralley in the Huntsville, Madison, Alabama area on February 28, 2016.

Set The Trumpet To Thy Mouth; Cause The Introductions Are Almost Over

The shit coming from the mouths of the media, and other Republican candidates continues to amaze me. Hay Rubio, Tuesday, Trump will be the nominee. The game is over. Cruise in on this a.m. too, swooshing out his pseudo-christian, neo-nazi, purple berries.

There are still things I don’t like about Trump. But, no one is fooled, no one thinks it’s entertainment, no one thinks it’s a reality show. It is a reality check for establishment Republicans, like Grinch, who have refused to listen to the rank and file, and it will be for Democrats when they find out their own workers are fed up with the aristocratic railroad too.

Illegal immigration is the example. Rational people understand that even Trump has to do business on the same field as everyone else. That’s why he hired illegals, he can be forgiven, when he builds the wall that will make our country safe again. And, I bet hispanics will Trump the Democrats too. Trump does hire them, and they understand the immigration problem but, they don’t want this great country to end up a socialist nanny-state either. In the long run, it’s not in their best interest. A lot of democrats are now abandoning the nannies and while not becoming Republican, they are ready to vote Trump.

About the only people still supporting Hillary are ignorant and naive black people who still don’t understand that a larger, oppressive, plantation is no better than slavery, whether you’re picking cotton or not. Hillary is an aristocrat. She understands, healthy slaves is productive slaves.

On Tuesday, the new president will be elected.