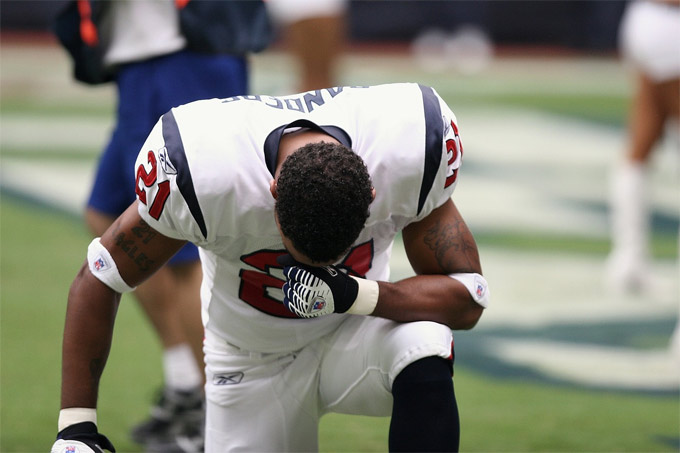 The NFL’s Foreboding Confluence: Sold Out… In More Ways Than One

The NFL last week imposed new rules on players who would choose to “take a knee” during the pre-game playing of the national anthem. Banishment to the locker-room instead during the anthem, and if you sneak out while the anthem is playing and actually take a knee, fines and penalties on your team – presumably to be passed on to you. Colin who…?

Colin Kaepernick, that’s who. After acting as an instigating agitator two seasons ago, he didn’t even get to play last year. No one would hire him. It is of course ridiculous to assume his passover was anything other than punitive. He is a first string quarterback that didn’t even get hired much less get to play. You don’t get to be a quarterback in the NFL unless you are the best of the best among the professional best of the sport.

It may very well be that the NFL ultimately has the right to determine the appropriate standards of conduct for it’s players. They are an employer, and that’s the way it is. Or is it? Baseball, apple pie and Chevrolet are as American as it gets and the almighty worship service of football actually transcends that. So, it’s perfectly ok to require a loyalty indoctrination prior to the game?

I’m not so sure about that. In the first place the loyalty indoctrination, however American it is, has nothing to do with the job itself. And, if a Russian decided to buy a team, and hire all Russian-American players, could he then require a loyalty indoctrination to Russia prior to the game? It is not, after all, a government function. Maybe an Islamic extremist could buy a team and do the same thing and require a loyalty oath by every player to Alla, Baptist or not, prior to every game. Would it be ok then?

There has been an alternative provided, but it is punitive unto itself. Banishment to the locker-room. That’s interesting for a couple of different reasons. I suspect that the NFL would like to avoid litigation as much as possible on this issue because they will probably loose. So, they provide the alternative, but because the alternative is punitive, they probably will ultimately loose anyway. The NFL is playing a time game, attempting to loose the resolve of players who wish to protest and the interest of the public in anything other than football.

“Oh what’s wrong with you?” You ask me. “It’s football our American game.” There are several very serious problems with the equation. Even if the NFL gets away with what does boil down to violating constitutional rights, the underlying issues aren’t going away, and this deliberate smokescreen on their part essentially makes it all worse. Any moron who can’t see there is a law-enforcement problem is just that, a moron. The fact that law-enforcement has shown no contrition for their sins is deeply troubling. Maybe it’s getting better, but then why should the NFL sell out on constitutional rights? The sad reality is, the NFL made a statement: Their profits are more important than the principles, if not the technicalities, of the US Constitution.

All this is in line with current politically correct thinking. Referred to as “populist authoritarianism” by some, the current administration is increasingly under the influence of TEA Party cult religious zealots who have no real interest in preserving the constitution. As it boils down, they don’t really respect their own supposed religious foundation either, opting instead for a theocratic hierarchy that results in the myopic cultism that most religious denominations are practicing nowadays. And guess what, all that fits right in with football worship and indoctrination.

Of course, here comes my disclosure and disclaimer. I don’t even watch football. I quit football after high school. I’ve looked back a time or two, so to speak, attempting to watch this important game or that, and frankly – it bores me to tears. And, I hate to tell you, but you can always tell who’s still enamored by their football indoctrination. They take the team sports mentality into everything, when in fact in politics it belongs absolutely nowhere. It’s a delusional, magical way of thinking that just doesn’t represent, and is not conducive to, the real world. I tell you the truth, anyone old enough to be a professional and whose world revolves around the football season, should not be allowed to be in charge of anything. It’s a psychosis, and they are not to be trusted as rational. By extension, I would outlaw “professional” college sports completely. For college sports to be legitimate, they should not be allowed on TV and no one should be allowed to attend a game that isn’t a student, faculty or alumni, or immediate family of those.

People say, “grow-up, the real world, always been that way, you’re naive, if you think, etc…” Well, I’ll tell ya something Mr. Real World, all those bloodied up saints in the Revolutionary war fought for principle and it wasn’t just the one at the bank. By and large most of our bloodiest, deadliest conflicts have been more about moral principle – not the bank principle. Although, more recently and in the the blooming age of football indoctrination, I sometimes think it’s about the crude oil principle.

Our United States, our freedoms, our rights are not just under attack, they are already being diminished, and the time to realize that our foundation and our constitutional principles must be protected, is now – not after 85% of all websites disappear from the Internet, for instance. What happens to freedom of speech and media on the Internet is only part of the equation, and a reflection of what is and will happen in the rest of our culture and society.

So, Mr. Real World, if you can’t hear anything riging in your ears other than the Star Spangled Banner, and if you can’t see anything other than that flag waving on the poll, and if nothing is really important to you other than who scores the next goal – congratulations. You are an indoctrinated member of the cult of football worship. You’re also part of an irrational group psychosis, your priorities are askew… and you are double minded in all your ways.

The NFL made the wrong decision at the wrong time for the wrong reasons. There is something wrong with the NFL, and the people who continue to support the NFL. And it all adds up to yet another foreboding omen about the future of our nation.