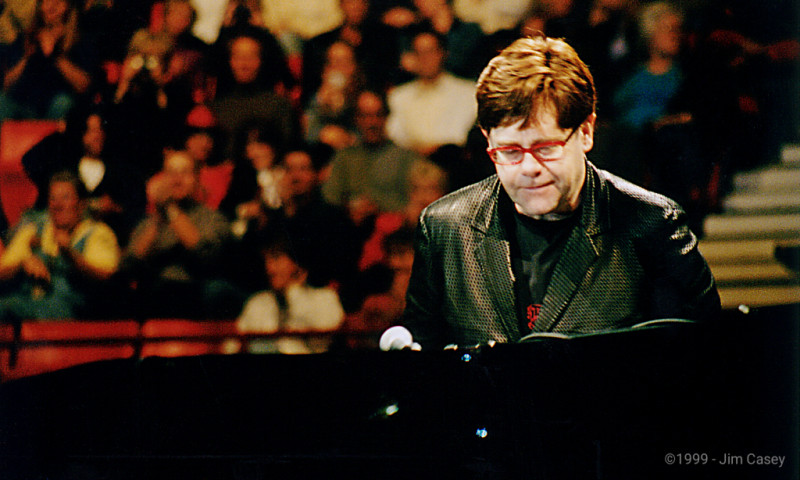 No! No! Not like that. With the camera. The camera!

Once again, looking back at the Oklahoma City concert in 1999 when I photographed Elton as a journalist. I’m not sure if I ever put this this pic on the Internet, but it’s pretty much unpublished. It’s just been sitting on the back burner, waiting for the punchline!

I already admitted to being a greenhorn and having inadequate equipment at the time. (The camera was a Canon 35mm slr which was most excellent at that time, unfortunately I only had an 80mm-300mm zoom where what I needed was a faster telephoto for the low light. The stage crew did help a little with light on a couple of shots, but.) I had a big flash ready to go because I didn’t expect to have good enough lighting. But, they wouldn’t let me use it, so I removed it from the camera. As it happened, I was shooting with a Canon standard 35mm SLR film camera that did have an onboard flash also. When I got to the far end of the stage, using a 300mm zoom, the flash popped up automatically. And, I fired it off anyway.

Well, I don’t think Elton was too happy with the parallel inuendos playing Okalahoma in the shadow of McVeigh’s bomb to begin with. He’s known to be a pacifist. And I’d say by the look on his face in this pic, that he wasn’t really too happy with me either. Oops. Sorry. It is interesting to note that later in the concert Elton beared down on the base end of the keyboard for a long interval, apparently amplified by the sound guys, hitting an offbeat rumble that literally shook the building. No doubt with intent to acknowledge the bombing. Amazing.