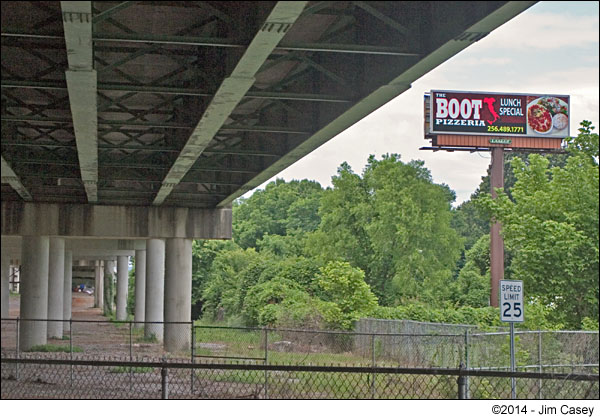 ALDOT and the City of Huntsville are acting in concert – conspiracy – to discriminatorily eradicate a certain social group from particular areas of downtown Huntsville. Because there are no legitimate pervasive reasons – the excuses are considered a load of malarkey by everyone – and it is the immanent domain of the people who live there, it is the very definition of a hate crime.

It’s hard to imagine the hateful nature of some people. The sign above is one of those that reportedly cost $500,000 when they first appeared in Huntsville. It’s an electronic billboard, practically a large screen TV, that rotates the advertising every minute or two. This one is located nearly perpendicular to the homeless camp in Huntsville referred to as Tent City. Tents can be seen in the background between the corridor of columns on the left in this shot.

As if the decadence of such an extravagant means of advertising rubbed in their noses weren’t enough, the signs owner, Lamar, has contracted one client advertiser to add metaphoric insult to injury.

Tent City is now being threatened by ALDOT with an illegal and unconstitutional eviction from the camp which has been in existence for nearly 20 years. State officials have made a number of excuses for shutting down the camp, all of which ring somewhere in the range from moronic to ridiculous.

Other camping areas have been closed near Braun Spring, and the Downtown Rescue Mission then run by Darwin Overholt, was moved out just a few years ago. The deliberately intended political overtures make it a form of human trafficking – at the very least. Individual cases of predestination extorted by the City of Huntsville makes it an act of domestic terrorism.