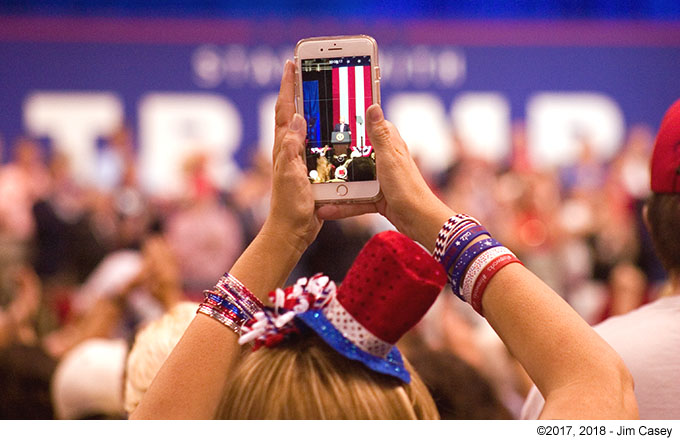 President Trump appeared in Huntsville on September 22, 2017 for a rally promoting Senate hopeful Luther Strange. While Strange didn't win, this is the rally frequently seen on national TV where Trump declares: "fire that son-of-a-bitch" in regard to NFL quarterback Colin Kaepernick "taking a knee."

There’s been a lot of conjecture fomenting several different perspectives on the Summit with North Korean leader Kim Jong Un last Tuesday in Singapore. Here’s my take on what I think will ultimately prove to be a successful agreement.

First, the initial handshake with Kim Jong Un cannot be overstated for it’s historic importance. On Twitter I said to Susan Page of USA Today, “IT’S THE END OF THE KOREAN WAR.” Some other Twitter guy questioned that, but the bottom line is that Trump is the first president to meet with a North Korean leader in person for any reason. Some will recall that North Korea had in fact never agreed that the war had ended. In principle that is now the implication.

I also note that Kim Jong Un destroyed some of his nuclear testing facilities prior to the summit as a good will gesture. The Western media cast a long and suspicious shadow on that act saying it was unverifiable and might not really amount to dismantling their nuclear capability. Well, what else could he do? Blow up 60 nuclear war heads right quick to convince everyone? I think it was just that, a sincere act of good will prior to the summit. And I think that’s why Trump immediately suspended war games with South Korea. Another gesture of good will and cooperation.

Donald Trump is not really of the Korean war generation anyway, and neither is Kim Jong Un who is just 34 years old. It is a new generation and a new era for virtually everyone. Old wounds from bloody conflicts die hard and it’s no surprise that the Korean politburo would not enter into negations with any Western nation until time and generations had passed, and until they would be able to “negotiate” from a position of strength – it’s about saving face.

In spite of all that, and because of all that, I believe Kim Jong Un and the North Korean people are pretty much tired of the whole mess. I think Kim Jong Un woke up one morning and said what the hell are we trying to do anyway. I think they would really like to normalize relationships with other nations, loosen their entire economic system including recognition of human rights, and end the isolation of the “hermit kingdom” which just doesn’t make sense anymore – even at the expense of their nuclear missile program. Their nuclear program is really more symbolic, for that show of strength, than a real existential threat.

Saving face doesn’t always follow a smooth and narrow path and I won’t be surprised if there are some bumpy spots on the road to the total denuclearization of North Korea. Most reports say it can’t be done overnight anyway, and as long as it may take ten years, everyone may as well fuss over it a little along the way. Their economy and trading relationships can’t just appear over-night either.

One point I haven’t heard discussed is whether North Korea intends to maintain a nuclear energy capability. We all know about the satellite photos that indicate there is no electricity in North Korea. Assuming all goes reasonably well, the recovery and growth of their economy, and industrialization, will have to include major advances in the power supply they have available.

President Trump has in fact said the nuclear threat is over. And the Western media has declared that it’s all reversible and the whole fast moving shebang is a standard pattern of broken promises by North Korea. Something tells me that in spite of the bumpy road ahead that this is different. Maybe not. But if North Korea fails to follow through – it’s all reversible. And the United States won’t be denuclearizing either way.

Happy Birthday Trump, credit where it’s due, pass the cake and the water-melon, and – a job well-done – so far.