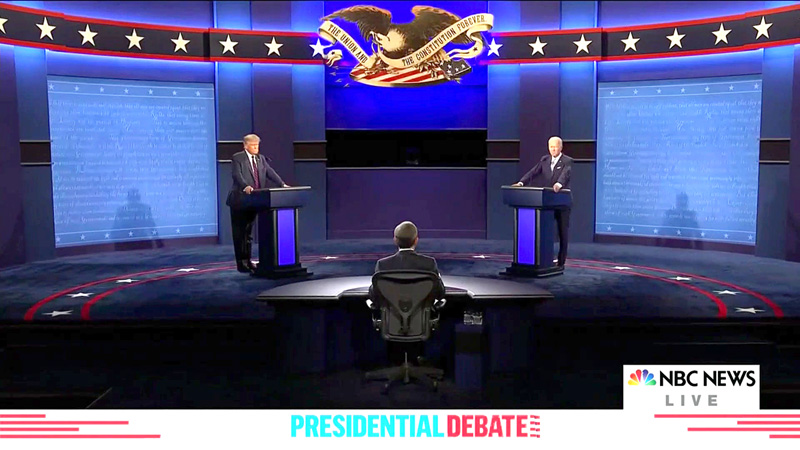 icon-arrow-circle-o-right The biggest takeaway of the debate actually came after the debate listening to commentators on TV and reviewing comments on Twitter.  Foremost, Trump won and I didn’t love him to start with either way.  I’ve often disagreed with his decisions, but not usually in a way that liberals agree with. The bottom line is that the liberal media wigged out when they realized Joe Biden lost the debate and started debunking the entire episode as worthless.

icon-arrow-circle-o-right I admit, when I’ve watched debates in the past, I usually end up getting bored and falling asleep because it’s past my bedtime anyway. Even still, the debates of the past have also usually been punctuated by rude and inconsiderate behavior with plenty of contentious interruptions.  They weren’t as entertaining, though, as this particular debate, which I watched till the end.

icon-arrow-circle-o-right Mr. Trump is renown for his “Art of the Deal” and now I think I know what his secret weapon really is. He is truly artful, and entertaining, in the way he interrupts and interferes with his opponent. I laughed quite a bit at the consternation of the others.  Neither Joe Biden or Chris Wallace are innocent of this tactic but neither, nor few others, are so entertaining as Mr. Trump.  He’s good it, so much so that it looks Presidential.  Some say he was a bully, but in reality, when a president is dealing with other state leaders, who would you want controlling the conversation? 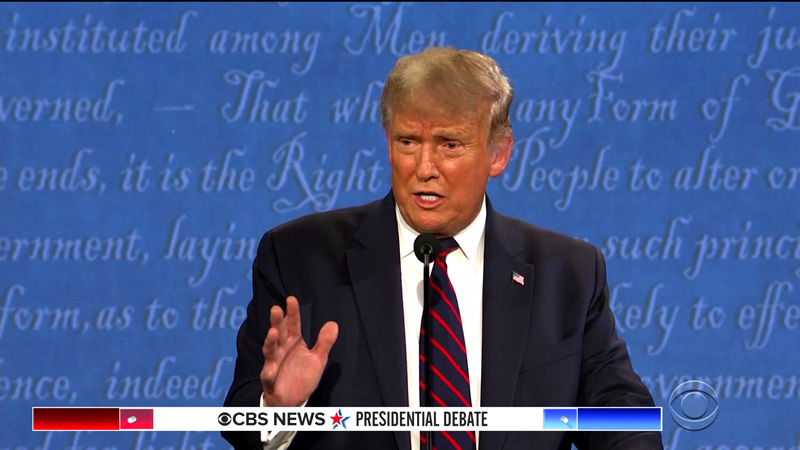 icon-arrow-circle-o-right Biden, on the other hand, appeared clumsy and even demented at times.  At first I wondered why the cameraman was following every little movement of the candidates, and then I realized it was probably automatically implemented by the cameras.  Biden swayed back and forth causing his background to look swimmy and giving his already deathly white and sweaty pallor a seasick affect. Combined with his attempted show of contempt with his obnoxious deadpan laugh – heh heh heh – I commented on Twitter that he came off like a cross between Nixon’s first debate and Glen Campbell’s last public performance.  Trump seemed to pickup on the affect and quickly became still and centered for the cameras.

icon-arrow-circle-o-right The debate was, however, short on substance and that actually plays into Mr. Trumps favor for the reasons already stated. This debate wasn’t about issues, it was about who can handle himself in the office and get things done.  Trump said at one point that he got more done in 47 months than Joe Biden has in 47 years. Not entirely untrue, and entirely believable by the man who commanded the microphone and attention of the audience.

icon-arrow-circle-o-right On the issues, Mr. Trump wins again.  Joe Biden’s attempt to tell everyone that Donald Trump was two weeks too late on the Corona Virus and still hasn’t come up with a plan is just juvenile rhetoric and his own people know it even if they won’t admit it.  Worse, Biden was criticizing Trump when just about everyone is fed up with emergency rules and masks and distancing any damn way and it ain’t Trump’s fault.  It wasn’t a good tactic for Biden.

Further, what everyone also knows is that the disaster in  New York early on was Cuomo’s and DeBlasio’s fault and the rest of the country hasn’t begun to reach that level of carnage. The plan everyone awaits is the vaccine and the democrats have criticized that as being in too big a hurry.

icon-arrow-circle-o-right For some reason, the media thinks it can ask a biased question and then define the lack of answer by Donald Trump.  For months, Donald Trump has been saying that the violence in Portland and elsewhere must come to an end while the democratic mayors do nothing, and the media seems sympathetic.

Then media asks Mr. Trump if he will denounce violence after the election.  What? These attempts by the liberal elite and media to turn the tables on violence have been going on since the last election when never-Trumpers were, and still are, the only ones to engage in unprovoked violence. The liberal clarion call is if they don’t like a policy it is an incitement to violence. It’s ridiculous at face value.

icon-arrow-circle-o-right The economy is another conundrum the democrats imposed on themselves making Biden’s rhetoric  pointless while people beleaguered by the faltering economy are also aware of its better than expected rebound.

icon-arrow-circle-o-right In all, this debate almost ends up looking like a foregone confirmation hearing for the Supreme Court with Mr. Trump the next appointed justice. Or, maybe I should interpret it to be a referendum on Amy Coney Barret prior to the election of the next president.

The mushy response by Biden seems to be acceptance if not affirmation that Ms. Coney will be confirmed.  It’s another conundrum the democrats and Biden can’t win.  They have said the elected president should pick the nominee when in fact Mr. Trump already is the elected president.  The arguments are again ridiculous at face value.

icon-arrow-circle-o-right All in all, I found the debate, sans it’s entertaining value, to be ho hum from a political perspective. What I do find particularly disturbing is the continuing and incessant bias by the media. There is no longer any legitimate pretense of objectivity by most media and that does not portend well for the future of this country.