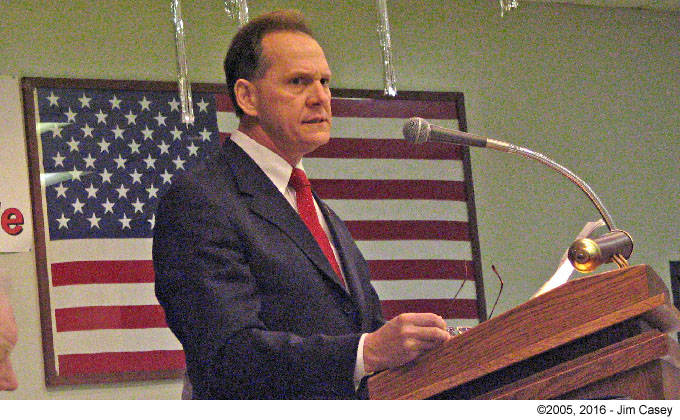 Roy Moore, the already contemptible Alabama Chief Justice is on suspension again. And, he may very well be removed from office by the upper courts, again. The first time, you will recall, was when good ol’ Roy refused to remove the Ten Commandments monument from public space. This time he has been challenged by the Southern Poverty Law Center (SPLC) for advising county clerks to stand in defiance of federal court orders to issue marriage licenses to same sex couples.

Because, without the constitutional process, you WILL loose your right to even be a Christian, or to express your opinion about such matters. It always works both ways, and if you continue to support a religious theocracy, which is really just an excuse to perpetuate the monopolistic, aristocratic, plantation system in Alabama – you WILL loose your rights as a Christian, and all the others constitutional rights that you enjoy so much.
As it is, you probably are not a Christian, because you have been indoctrinated into cultism and you have been deceived into a delusional and perverted system of exploitative ritualism that actually benefits the people you are serving – cultism does not serve God.

Hay, I am conservative, and a Christian, and a native Alabamian. And I don’t always agree with the SPLC which I often find to be self-serving. I even advised against same sex marriage, but when it came down to it, there simply was no constitutional basis to discriminate for that reason. Here’s the problem. Folks have got to figure out that if they want to practice their religion and personal beliefs, they have to do so in context. Your salvation and faith does not depend on what someone else does. You can invite them to Church, witness until the cows come home, and go home to pray on your knees in private. Even the Bible says not to pray on street corners.

Which brings me to another point. Doing business with the general public means doing business with the general public. As far as I’m concerned, you cannot have a business license if you refuse to do business for arbitrary reasons of discrimination. Doing business with the public is the domain of Caesar, and again if you are a Christian the scripture is plain. That goes for Hobby Lobby and any other business that wants a custom tailored dispensation from the federal government based on their “religious faith.” NO. The Bible is the original document on separation of Church and State. I can see very few possible exceptions to this rule. Maybe, a freelance photographer who attends a wedding and practically becomes a part of the ceremony. Cake decorators, I don’t think so. Brick and mortar open to business – hell NO. Do business or go work in the Church office.

Perhaps not coincidentally, Alabama Speaker of the House, Mike Hubbard is now on trial for 23 felony counts of using his political office for personal gain. Coincidence or not, this fits right in with the pattern of self-serving, demagogic abuse and exploitation seen with Roy Moore. The Alabama legislature is notorious for passing ridiculous, unconstitutional laws that inflict a lot of damage on the way to revocation. It’s not far-fetched to call the tactics by Alabama legislatures domestic terrorist jihad. Ultimately, however, the facade is a smoke screen for more ulterior self-serving motives. It’s time for both Roy Moore and Mike Hubbard to go, not to return, hopefully because they will be in the Alabama slammer during the next elections.

It Is Written | Damn Roy Moore

Roy Moore lost his license a long time ago. If he and the Alabama Supreme Court can’t come up with a valid legal argument based on the US Constitution, it’s simply time to accept that separation of Church and State and the integrity of the US Constitution is more important than Roy Moore’s fear of the apocalypse.

Today’s newspaper reports that Roy Moore, (previously) Alabama’s “Ten Commandments” Supreme Court Chief justice is following in my footsteps declaring his approbation for and the virtues of the United States Constitution. His biggest concern is his perception that the states should have more authority than now afforded by the federal government. He is the Republican […]