Yes Virginia I AM Still A Journalist 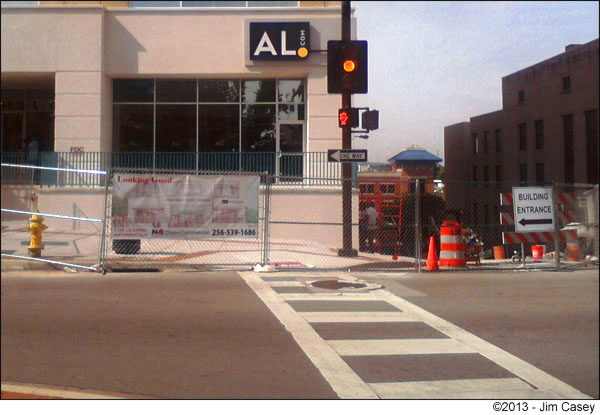 This photo shows where an enclave of “professional” journalists, apparently the remnants from The Huntsville Times, now working for “AL.com” have set up shop in downtown Huntsville – only three blocks from the original “Times Building.”

The news is good for media organizations and journalists who are engaged in journalism for the sake of making money. But it is bad news because ultimately, journalism really shouldn’t be about making money, it should be about providing a comprehensive and accurate record of events and commentaries relevant to the public discourse, and generally the public’s right to know.

In my opinion, the investigators who were wiretapping the Associated Press journalists were going to far to begin with, setting out on a witch hunt without any real evidence of wrongdoing, and apparently without any knowledge of who the “illegal leaks” were in the first place. In fact, if the government henchmen knew who the leaks were, then at least theoretically, they would have legal justification for obtaining a legitimate warrant – instead of the blanket dragnet widely thrown across everyone who happened to be in the way at the time.

What is particularly disconcerting, however, is that there is a need, real or imagined, to define “journalist” at all. I am a journalist because I say I am – and because I hold out as such consistently plying my trade and craft over a period of time. Roughly, the broadest definition that the senate panel came up with. But, what if I’m not a journalist? What if I’m just a citizen in the neighborhood listening to gossip over the backyard fence? At what point am I criminally liable for something someone else did, or said? Never, I should think. The point is, avoiding the middle ground is ridiculous – because there shouldn’t be any middle ground. Freedom of the press, and freedom of speech are virtually synonymous.

We all know that having prescient knowledge of a specific crime in advance can make you an accessory if you don’t notify authorities. Some rare instances have been defined that require certain people to report vague information about criminally conduct such as confessions of child abuse to a priest or professional confidant. While I offer no solace to child molesters, I still have to consider this a violation of Church and State, and wonder if closing off avenues of counsel for such situations will actually exacerbate the situation, and other like it, even more.

Once again, true fascist that he is, Alabama Senator Jeff Sessions reared his ugly head declaring that the guidelines are too broad. And, there’s the danger. There are a lot of self-serving business people, and tyrannical power heads, with personal agendas who would like to silence both the media and freedom of speech in this country. Even Dianne Feinstein, who seemed to be a proponent of a liberal definition, crossed her own lines just a bit when she said journalism is a “profession.”

Depending on how you define “professional.” Professional, however, isn’t always defined at being paid, making money, or as a business proposition. Encarta defines profession as “an occupation that requires extensive education or specialized training.” Looking further, “occupation” isn’t necessarily defined by making money either. Fair enough. By those definitions I am in fact a journalist. Ok, I admit it. Advertisers haven’t been buying me lunch lately. Then again, they haven’t been influencing whether or not I report on something unflattering to them, or censoring comments that they deem inappropriate based on their pursuit of business success.

Case in point. God bless Paula Deen. Crucified by her sponsors and kicked off the Food Network, all because she used colorful metaphors while being engaged with a gun in her face and being robbed twenty something years ago. She used the “N” word. So what, get over it. In fact, such absolute taboos in our culture will do nothing more than stifle the discussion that allows for airing out differences and grievances that would prevent further escalation of tensions that could result in more serious confrontations. This week Paula Deen also began her cooking come back. Best of the gumbo to you Paula.

It may seem extreme and ridiculous that we could loose freedom of speech in this country. But, have you noticed the news stories about the California schools district who are now eavesdropping on their student’s Facebook accounts? If that’s won’t have a chilling effect on free speech, I don’t know what would.

Why create a legal definition for “journalist” at all? So, they got it right enough – this time. But, they also established a baseline for the slippery slope. Who’s publication can be narrowed out of the margins of constitutional protection? What passes the censorship filter on fb? When does Paula Deen not just loose a sponsor, but also become the subject of prosecution? If I didn’t already know that our government is rife with corruption that depends on maintaining the “cult-of-silence,” I might see it differently. As it is, the more Julian Assange, Edward Snowden, and Terry Jones make the news – the better.

As for me, I haven’t met with any spies in the last few weeks, but if you want to send me some secret information – don’t tell Jeff Sessions.

No doubt, Terry Jones might have violated some traffic laws. However, the legal dragooning displayed by the Polk County Sheriff ought to be illegal unto itself. In truth, one more of the fascist big brother tools I have witnessed in recent years is the creation of trivial technical violations that are never meant to be enforced until someone does something politically incorrect, or violates some big shots personal agenda.