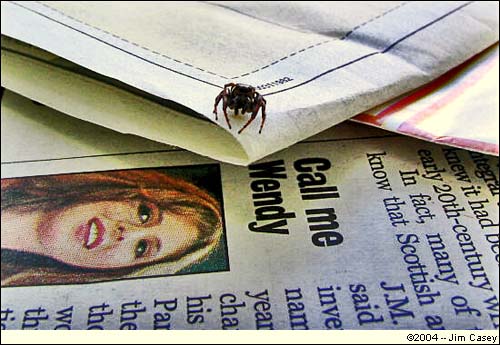 The Spider’s Web Is Spun!

Well. I don’t really react that way since I usually read the
complimentary paper at the burger breakfast joint. Usually, it’s just
another customer obnoxiously hogging the premium still sitting on his
otherwise empty table while he smokes a cigarette outside, or while he
myopically reads every line of every story of every section for an hour
and a half. He ain’t got no couth.

It’s enough to make you buy your own copy. Not this time dammit. And,
don’t blame me they’re going out of business either, I’ve paid for
plenty of newspapers. Even delivered a few too. Nope, you can’t even
blame the damn dog for chewing on it, or peeing on it, or the rain, or
even the kids reading the comics or making papier-mache.

THERE IS NO HUNTSVILLE TIMES TODAY.

Not in print anyway. From now on it’s only Wednesday, Friday, and
Sunday. Or, you can go online with your chosen platform, desktop,
laptop, tablet or cell.

I don’t care, I don’t like it, I want my DAMN PAPER. And frankly, I
still think the Alabama Media Group is too far ahead of the curve. The
online edition just isn’t the same, and daily print newspapers can and
will survive.

Next, I think I’m supposed to say something like – that’s all
emotional, and intellectually I really knew it would happen and it
probably won’t be long until there simply is no print paper at all.
But, I’m really not convinced.

Obviously, the world is changing. But it does seem ironic, that the
“progress” really does feel like a backward step. Perhaps befitting
for the state, sometimes referred to as “Alabama the backward.” This
time though, it isn’t thank God for Mississippi, because it’s New
Orleans that jumped off the cliff with us. Maybe I could move to
Jackson Mississippi. I bet they still have an everyday paper. Then
again, so does New Orleans after all, which is now being supplied a
daily local paper for New Orleans from Baton Rouge.

Technology suddenly doesn’t seem so cool when it’s required as opposed
to supplemental. I’ve been publishing my website www.tocc.tv on the Internet for nearly
fifteen years. I’ve never published print. I am the new technology.
But, I’ve always thought of it in addition to print media, and a
potential variation of broadcast TV news, not a total replacement.

I don’t like the idea of replacing print media and broadcast TV to the
point that everything is on demand and interactive. You loose a sense
of community. If everyone watches Big Bang at different times, how
will you know what the tweets mean?

What if you loose your IPhone, or forget it when you go for a walk in
the park or something. How can you grab an electronic edition of
anything for a quarter? That’s also what I don’t like. A “device,” and
probably soon an app and a subscription, are compulsory. The print
options – all of the print options – seem to be disappearing.

There are still alot of people who don’t have smart phones or tablets
or portable broadband, maybe not even at home – and they will loose
access to important daily news and information. For some it’s not so
important, but the way the “progress” is going, it’s quickly going to
become an all or nothing proposition. I don’t think that’s going to be
good for the overall literacy rate of anywhere – much less Alabama the
backward.

Besides all that, what are you going to use to drain your freshly
fried catfish if not this mornings daily paper? I already have trouble
running out of paper plates. Ok, that’s my own fault – but it’s a
manageable crisis because I could still buy my own newspaper!

So today, as I have absolutely no choice in the matter, please excuse
me while I check my al.com newsfeeds and slam this cup of Joe. Then, I
can check USA Today. It’s still technologically supplemental.