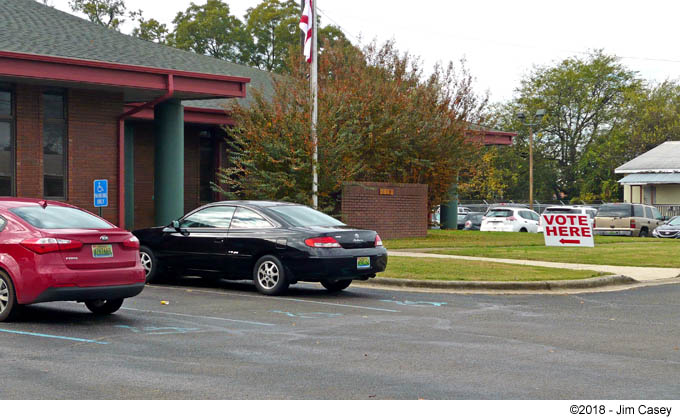 Voters across the nation are energized to turn out in droves. In predominately Republican Alabama the scene is anti-climatic.

Vote 2018 !!! As the energized nation prepared to turn out in droves today, this was the scene at my polling place around 9am.

One local pundit had advised that physically handicapped and those over 70 are allowed in Alabama to move to the front of the line. So, while no where near 70 and not really too stove-up, we do gray early in my family, so I prepared to hunker over just a bit and shuffle my way to quick voting.

It didn’t work. When I got inside there was only one person ahead of me who was already showing their id as another was already moving away clearing my path to immediately pick up my ballot.

In my most previous column I cast a deliberately satirical pall on what I still feel will be an anti-climatic election at the end of the day.

As tornado watchers sometimes say, “it’s a familiar hook pattern,” but often it doesn’t turn out to be a tornado. The loosers roiled up from the last election are pissed-off and are hell-bent on taking charge to restore their version of order. Hit snooze for two years. Next cycle.

Unfortunately, this election could be different for the longer term implications. It wouldn’t surprise me for a larger than normal turn-out of republicans to quash the rebellion. That would be news.

But, in all their exuberance, I’m not sure Trump supporters, much less your moderate conservatives fully understand the longer term under-currents. If they did, I think they would be doing some things differently. If it’s nothing but a last hurrah for the uppity white folks, then the under-tow continues – and down the drain she goes.

However, many well meaning liberals have been deceived and will become more conservative as they grow older and realize sensible conservatism doesn’t necessarily mean extreme fundamentalist TEA Party zealot.

The crux of the matter is that this election could decide either way – or not. Ho hum. To Save Our Nation, however, it will be better for conservatives to practice ending complacency beginning today – that I can tell you.

Get out today and vote conservative – to Save Our Nation !!!