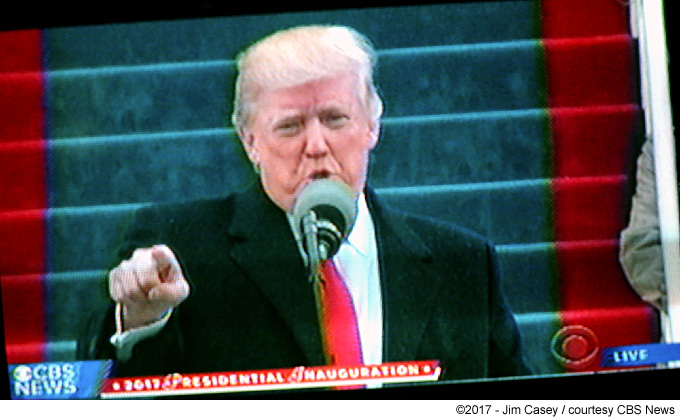 Donald J Trump gives his acceptance speech after being sworn in as the 45th president of the United States.

I continue to watch and listen to the mainstream media – and noting that the photo above was a frame grab I glommed onto from CBS – I point out that I am watching other networks today as well, and see the same ultra liberal, out-of-touch, and delusional perspectives in regard to President Trumps address today. It continues to be the surreal undertow in this election cycle. I suppose that most of their bias comes from the blow by blow of the campaign, but think it better to at least consider today’s events unto themselves.

That having been said, I now throwback much, much further (but not to WWII), because being on the tale end of the baby-boomer generation, I continue to see Donald Trump’s election as the first post Kennedy dynasty era presidency. By the same token, I view Barack Obama’s presidency as the culminating crescendo of the Kennedy dynasty. But, it is done. In fact, I almost titled this column with a quippish “John F. Kennedy is Dead; Finally.” Well, I’ve more or less said that before, and should also say that while it is true in so many ways, it is also true that the US is simply not the same country that it was in 1963.

Even still, many of my generation correctly see the impositions of the Kennedy dynasty, however necessary or justified, as an unofficial system of marshal law. And the fact is, so much was accomplished from that time through methods that could never stand the light of day, and in fact were, and still are brazenly unconstitutional. In a way, it’s no wonder that many colored folks have no respect for the constitution. It’s a concept they never lived, and the not entirely successful civil rights era depended upon those inappropriate tactics, apparently leading many folks to believe that is the only way things can work.

But, in it’s own way, based on President Trumps remarks today, Barack Obama and the final accomplishment of affirmative action is all the more justified and all the more honored. Today, Trump continually talked about “all” American’s maintaining an air of inclusiveness:

So to all Americans, in every city near and far, small and large, from mountain to mountain, and from ocean to ocean, hear these words:

You will never be ignored again.

Your voice, your hopes, and your dreams, will define our American destiny. And your courage and goodness and love will forever guide us along the way.

Together, We Will Make America Strong Again.

In fact, he only mentioned race one time saying: “It is time to remember that old wisdom our soldiers will never forget: That whether we are black or brown or white, we all bleed the same red blood of patriots, we all enjoy the same glorious freedoms, and we all salute the same great American Flag.”

Mr. Trump seems to be saying the time to take notice of race is over. An overture which ought to be what all folks black and white are happy and even relieved to hear. Black folks don’t have to be “black” anymore, just red-blooded Americans. Of course, maybe it also means black folks don’t “get” to be black anymore either. Maybe that won’t be so great, but then we all know the excuses have been exploited by some who never have experienced real discrimination and simply whimper and whine when something doesn’t go their way, always blaming it on race – it is their indoctrination. In truth, Trump’s administration won’t be a sharp contrast of black vs. white because as already noted, it is no longer 1963, and the world we live in today is much, much smaller, and much, much more intertwined.

All of that also adds up to implications on the world stage. The fact is, there is no such thing as “isolationism” or even “nationalism” in the same sense as there was in times past. Nowadays, whether you visit their Neighborhood or not, the Russians and the Chinese and Argentinians are all really just around the block and never completely out of sight. Just 50 years ago, color TV was still fresh, and even dial-up telephones and radio was just reaching their apex. There sure as hell was no such thing as an “Internet.”

In short, Trump’s return to nationalism as defined by today’s realities will be unifying and much needed. So called “protectionism” will also be tempered by the realities of resources and costs, but the fact is our borders have been wide open for forty years and we have suffered losses in jobs and wealth. I’ve said for the last four elections that the American economy is in decline – it’s just that Trump is now coming forward to admit that reality. And guess what, China’s arrival as a world economy means we damn well better shore up our own best interests because they will be in charge of the world economy before too much longer and we need to reinforce our strengths and assets before they become a weakened and vulnerable underbelly.

I’m still the first to say I have misgivings about Mr. Trump, but maybe a few old fashioned values from the fifties wont’t be such a bad thing – as long as it is all tempered with a good dose of modern, interconnected reality that simply isn’t going to change. I guess we gonna be a’right.

We will no longer accept politicians who are all talk and no action – constantly complaining but never doing anything about it.

The time for empty talk is over.

Now arrives the hour of action.

In accordance with the executive order of Pres. Trump TOCC TV will continue to provide content well into the future.