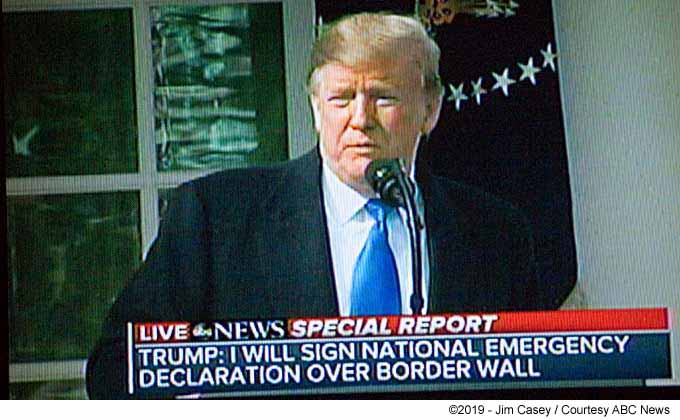 President Trump has brilliantly fulfilled his campaign promise to secure the southern border with Mexico in a way that ultimately turns out to be even better than he had promised.

He correctly states that Mexico is paying for the wall through renegotiated trade deals and by stopping the influx of illegal immigrants that take jobs needed by Americans and who often send a portion of that money back to relatives in Mexico or Central America. Further, Mexico pays for the wall in the welfare benefits and social programs that are no longer burdened by the less experienced and less educated and less employable illegal immigrants that will now stay home.

Perhaps the biggest savings that will come to America, helping to pay for the wall, will be in stopping the hard core drugs that come across the border resulting in lost employment, lost productivity and very often the loss of otherwise productive American lives. And conversely, a substantial amount of illegal marijuana will no longer make it to the streets in those states sensible enough to have legalized it’s use. Those business people will no longer compete with the illegal importation and so their income and sales taxes will increase.

As it turns out, relying on congress year after year to include additional funding to secure the border was probably not the best idea anyway. The Great Wall of China took 2000 years to build and is roughly three times as long. Even though our border is only a third of that and with modern building techniques it will still take more than a few months – more like several years or a decade or two – to fully secure the 2000 mile long border. By relying on the military to secure the border, they will become entrenched and will be much more difficult for any more liberal future presidents to shut down, and much easier for liberal representatives to save face by keeping border security funding hidden in the massive Pentagon budget.

Whether or not most of the illegal immigration is hostile, the shear numbers are in fact an invasion that has already proven to be culturally and economically disruptive while providing no means to dispense justice to people who often remain unseen in the shadows of society. That reality is not only unfair to them, the evasion from civil authority prevents that segment of the labor force from seeking legal redress for substandard working conditions or other labor and wage violations. That knocks the floor down for the entire American labor force. The bottom line is that national security and borders are the business of the military and it’s exactly appropriate that our own military directly protects American soil – something it’s been doing for our foreign allies for many decades.

LAUGHABLE MOMENTS
During Friday’s news conference Mr. Trump mentioned wacked-out political pundit Ann Coulter who came out hard and fast ridiculing Mr. Trump for his “acquiescence” on the campaign promise she contends will now never be met. Mr. Trump said he likes her but doesn’t talk with her much saying, “…she’s off the reservation…” Hoo ha! We all knew that.

Later in the day it was reported that House Speaker Nancy (The Shrew) Pilose expressed concern that Mr. Trump is irresponsibly draining desperately needed money from the military budget. The Pentagon budget is around $700 billion of which Mr. Trump has commandeered only $3.5 billion. If Pilose’s perception of the numbers isn’t rediculous, her assertion of love and concern for the US Military certainly is.