The Other Selfie One Too 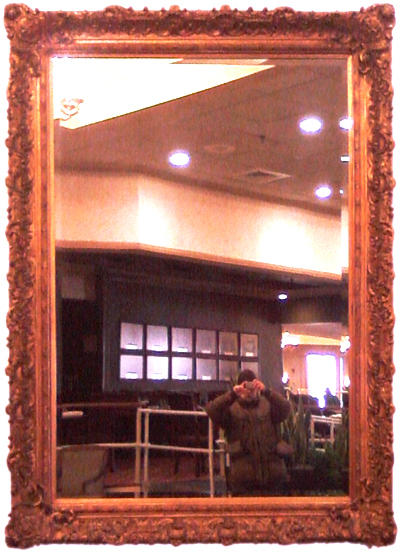 SELFIE! They say is the new word of the year. And I used to think I was some kind of narcissist because whenever I find a reflective surface when I’m out taking photographs, with a standard old fashioned digital camera, I stop and take a snapshot of myself.

The photo here, however, was taken with my cell phone, but of course I still used the mirror instead of turning the camera directly on myself. And why not? It’s like I invented the selfie before everyone else learned to shoot themselves with their cell phones.

The folks of Huntsville, and the traveling tourist from elsewhere, will probably recognize the big mirror as being in the Holiday Inn downtown. To me however, it was still really the Hilton, even though the Holiday Inn moved in and took over just a few years ago. I took the shot only a few weeks ago.

The sad news, of course, is that the life of the hotel, Hilton/Holiday Inn is over, having closed permanently just a week ago last Sunday. It’s just not right. I don’t see how they can do anything with that building other than turn it into some kind of shrine, or museum. Because everybody knows, ELVIS PRESLEY SLEPT IN THAT HOTEL! Let’s face it. They simply cannot demolish that building. Because if you’re from Huntsville, you know…

THE ELVES HAVE NOT LEFT THE BUILDING!