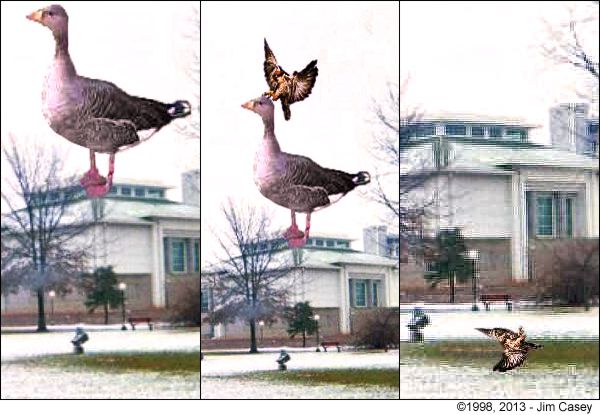 In this exclusive and astonishing series of photographs taken by Jim Casey in 1998, a giant duck attacked the Huntsville Museum of Art. After defeating a large hawk that attempted to takeover the turf, the monster duck disappeared.

So, when I first heard about some big thing going on in the media with something called “Duck Dynasty,” I immediately thought to myself, “what the heck is a duck dynasty?” After thinking about it for a few minutes, I came to the conclusion that it must be some kind of cross between rogue ducks, Dick Cheney, and W. Bush. But, that didn’t seem to make sense.

Then, it dawned on me that they must be talking about an article I posted on the Internet back in 1998 about the grand opening of the new Huntsville Museum of Art. In an amazing coincidence, and documented by yours truly with an astonishing and exclusive series of photographs, a huge duck attacked the new facility as soon as it was opened. (See amazing and astonishing photos above.) What the heck! I got all excited thinking I must be headed for some kind of national interview and promotion for my website. But, it didn’t make sense either. As remarkable as the article and photographs are, they are after all, fifteen years old.

Then, I found out, Duck Dynasty is a TV show where country folks… hell if I know what they do, I’ve never seen the show. Turns out, some fella name Phil Robertson who is on the show has disclosed his personal opinion that homosexuality is a sinful act. Then, the network kicked him off his own show, which is tantamount to kicking him out of his own family, since it’s a family show. The family, by the way, has said “no Phil, no show.” They just don’t feel like it.

Well shucks. I’ve proffered my opinion on the state of homosexuality, not to be confused with the state of New Orleans, right here on these pages – and I’m not going to recant either. Some folks are saying that Phil’s right to express his opinion is a religious thing. That’s fine. But I see the whole homosexual mantra as a political thing. It seems to me that homosexualism is a tool of neo-Nazi fascism. The so called conservatives don’t mind bashing gays, and yet some of the same Churches that denounce the “gay sin” are also advancing women as authorities in the pulpit. That’s not Bible. And in fact, the advancement of women in positions of authority seems to be the first step in the expansion of homosexualism to start with. It’s one reason why I say it’s more political than religious.

I also figure that homosexualism is a tool of liberal fascism. The liberals believe in “pro-choice” as long as they get to decide. They both seem to be hell bent on ethnic cleansing by telling the other guy what to do, or what to be, or how to do it, or not to do it, and then they both get all bent out of shape when he turns out that way. The only thing worse than a conservative fascist is a liberal fascist.

The liberal fascist network is the real story. Right or wrong, statistics show that the American people are just about split down the middle on the subject. How can any major network presume to be the omnipotent voice on an issue which is clearly undecided in the public forum? The fact is, the network has an agenda, and they don’t mind engaging in censorship in order to achieve their agenda. That’s just plain wrong and unamerican. The liberal fascists have to understand that pluralism in this country means ALL sides of an opinion belongs in the public dialogue.

There were many issues the framers of out constitution and our government didn’t even attempt to answer. It’s why we have a bill of rights that includes freedom of speech, freedom of press, freedom of religion, the right to bear arms, etc., all of which ensure open discussion, negotiation and compromise. Without an open discussion, issues are not resolved, and ultimately tensions will rise and subsequently there will be unnecessary consequences. For this great country to survive and work for everybody, liberals have to be just as tolerant as conservatives.

The moral of the story is: Whether you go strolling through Big Spring Park, or go surfing the liberal TV network, wear your flip flops and watch out for the bird Poop.