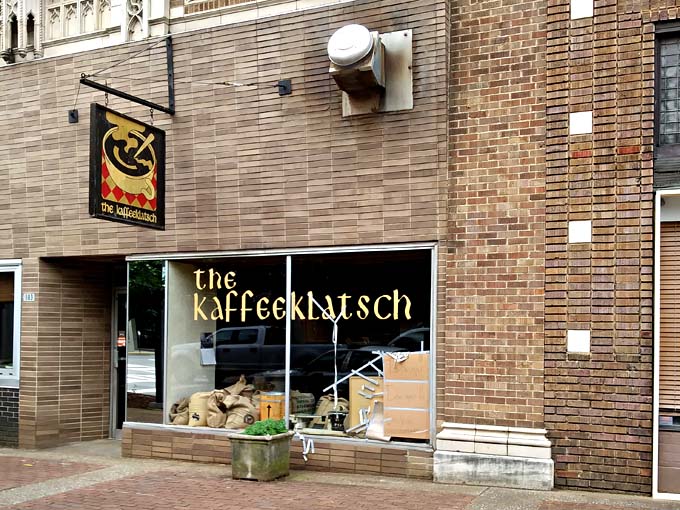 The Kaffeeklatsch in downtown Huntsville appears to have sustained minor damage during the Wednesday night rally but reports indicate it may have been unintentional. No other property damage has been reported.

The Constitution Matters – Even In Huntsville

Whoa. What the hell happened in Huntsville on Wednesday night? Yet another protest against the death of George Floyd had been scheduled, this one by the NAACP. This was the third event, the other two just days before. All had been peaceful and orderly and included marching around the downtown square. This one, however, would end differently with police instigating violence against peaceful protesters by dispensing tear gas, shooting rubber bullets, flash bangs and noise aversion.

The rally was reported to run from 5-8 pm. And then during the event, someone apparently decided to change the rules in mid-stride and declared the event would end at 6:30 pm without marching on the square. Police advised they waited until 8 pm (when the event was actually supposed to end) before they became violent. There is no doubt the marchers expected to linger past the legitimate ending time of 8 pm. What good party ever ends on time? And in fact, freedom of assembly is an explicit constitutional right.

I’m not even going to consider the 6:30 pm cut off as being valid. It’s ludicrous at face value to think any such rally would only be an hour and half, and whether or not wires got crossed, or there were typos, or the other excuses that will eventually surface – is all a load of shit.

Make no mistake. I’ve been vocal on social media in support of a crack-down, even military use, in cities like New York, Los Angeles and Minneapolis where the protests began to automatically pave the way for destruction of property, looting, and even injuries and death. Those situations had escalated to a state of anarchy several times and were injuring the well being of those towns.

Huntsville, however, is none of those cities in any sense. Rarely in history has any event gotten out of control in Huntsville, not even during the sixties. Not that it couldn’t happen, but it just isn’t expected to be in the cards around here. Wednesday night was no different. The protests were peaceful if spirited and there was no disorderly conduct by protesters. Except, they lingered ten minutes longer than the legitimate 8 pm ending – and then the police became violent.

As it was, covering the event in person had become problematic for me for a number of reasons and so I decided to stay home and really didn’t expect much to happen anyway. Then, flipping through channels on TV I found the live coverage and my jaw dropped. I watched the police pushing protesters back for an hour and a half, eventually chasing them all the way into Big Spring East, and finally all the way out the south side of Big Spring Park.

I don’t need Mayor Tommy Battle, Chief Mark McMurray or Sheriff Kevin Turner to tell me the lies they want me to believe in justification of their excessive and unnecessary use of force – and violations of constitutional rights. I watched, I saw it, it was obvious.

The next day, I wasn’t surprised that the authorities started making excuses. They’re gonna cover their ass. But, I was surprised at the undertow of arrogance and authoritarianism that was also obvious in their remarks.

Tommy Battle’s statements reek of segregation, classicism and aristocratic authoritarianism. The law enforcement statements were laced with the same old good old boy facade of shucks we did what had to be done. Bullshit.

An old favorite trick by the combatants in police uniforms is that they can read your mind. They already know what you’re going to do, and so they believe the law allows them to violate constitutional rights before anything illegal actually occurs. They are so good at it, they can actually justify their participation in child molestation, torture and human trafficking forty years in advance.

Fittingly inappropriate, the show of force by the deep state bloody Sunday State Troopers punctuated the systematic violation of constitutional rights. And yes, this was an unconstitutional authoritarian conspiracy. Obviously, I do not support choreographing events in order to assert dominance where dominance is not legal or constitutional.

One thing is certain. In Huntsville, the law-enforcement community is unconstitutionally militant and based on their lack of contrition they intend to stay that way. If anyone has any doubts, I can assure you that the arrogance and lack of respect for constitutional rights, and life, that left George Floyd dead is prevalent in Huntsville. You can see it in the news, you can hear it in the statements that were made about the brutality on Wednesday night, and God forbid, you may have experienced it – as I have.

Superficial changes are already being imposed in other cities that will allow Huntsville’s aristocracy to dawdle in the shadows and slap itself on their good old boy backs and continue on with the status quo and no meaningful reform. This time, however, Huntsville lost her innocence – probably for the last time.

The future is changing and the arrogance and disregard for constitutional rights does not speak well for sleepy-town Huntsville. Next time, and there will be a next time, escalation and more serious trouble has been invited. After the shock wears off and the protesters realize they have been violated, they will be mad as hornets – and they will be ready for next time.