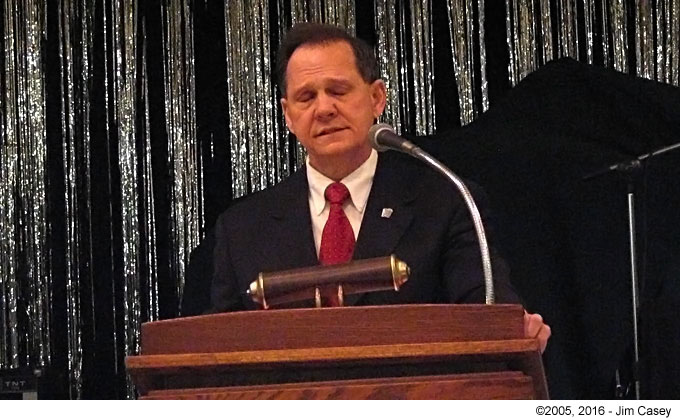 Roy Moore grimaces at a 2005 Republican Executive meeting in Huntsville, as if in anticipation of his final removal from office.

Chief Justice of the Alabama Supreme Court, Roy Moore, has again been suspended from office by the Alabama Court of the Judiciary on ethics charges over his defiance of the US Supreme Court in regard to same sex marriage in Alabama. He was previously removed from office over his refusal to remove the ten commandments monument from public property. His suspension effectively ends his judicial career permanently as he will be ineligible for another term due to age restrictions.

Roy Moore has heretofore been the ring leader of the old south aristocracy attempting to maintain the plantation hierarchy by propagating adherence to Biblical Old Testament legalism. With Judge Roy Moore leading the charge, many of the religiously devout in Alabama fell in line like sheep headed to the slaughter, accepting the extremism without realizing they were being duped by a cult leader on the same scale as Jim Jones. Unfortunately, as evidenced by his reelection to office after his removal for the Ten Commandment debacle, Roy Moore was largely successful in his efforts to enable extremist religious leaders, fueled by aristocratic cash flow from the back pew, to spiritually bind many Alabamians into religious, political, and subsequently, business and employment compliance.

While I am conservative and have personal misgivings in regard to same sex marriage, it is evident that the State of Alabama and it’s people have been held in stagnation from a political, business, and cultural perspective by the extremist cultism of Roy Moore and his deputies. Even a conservative and religious state needs room to grow and prosper, and this has not been possible because of the territorial strangle hold of the crime bosses that Roy Moore enabled. Unfortunately, while it seems all but certain Roy Moore won’t be back on the State Supreme Court, it is unlikely that he will bow out gracefully and leave his injurious tirade in public life for good. Even if he does, the damage inflicted by his extremism will haunt the state for years to come.

So long for now, Roy. How ’bout do us all a favor and accept your retirement as permanent and do something that won’t cause so much trouble, like fishing.