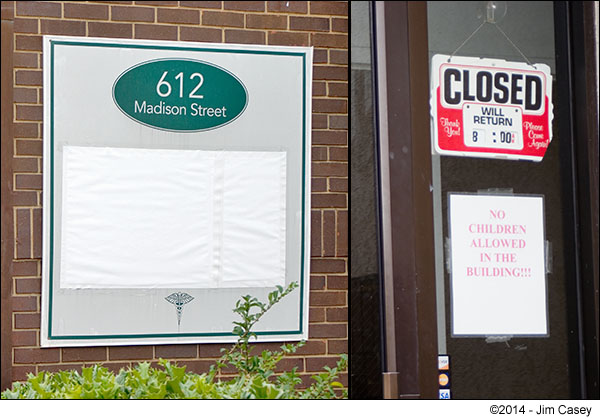 One of several previous locations of Abortion Clinics in Huntsville - closed.

The New Hampshire Primary And The Dearth – Thank God – Of Feminazism

The results are in from the New Hampshire Primary and the conclusion of the matter is even more pronounced than the walloping indicated in the early evening tally’s on election day. Bernie Sanders and Donald Trump walk away with words ringing in their ears like “trouncing, decisive, landslide, and walloped.”

Perhaps the most remarkable surprise of the evening isn’t that Trump reversed his mediocre showing in Iowa to win outright in New Hampshire, or even that Bernie Sanders managed to win by a commanding lead. The real story is that Hillary lost …big time. Hillary lost by such large margins, that it can also be said Hillary didn’t just loose, but Bernie Sanders actually did “win.” It’s a game changer.

The sub-plot is that Hillary Clinton didn’t win or loose because she’s a woman. She just lost. For the last thirty-six months we have heard ad-nauseum about Hillary the first woman president. Hillary, the champion of women’s rights. Hillary… the feminazi. But, guess what, the world has changed, and suddenly there seems to be a dearth of feminazi wannabe voters. “Suddenly” might be too strong a word, because if you have been watching, the subtle indicators have been there. When Gloria Steinem appears on TV, rare these days, she looks a lot like the Wicked Witch from the West. She’s become a fairy tale in her own mind, and not really the kind of “Princess Diana” role model that an already maturing generation of young women really care to be much like. And Elly Smear, she’s essentially vanished into the smokey haze of the wizard of time as well.

So, what is a feminazi anyway? Well, for those none-the-wiser, the feminazi’s are a hard core bunch of bull-dike females who broke loose the chains of genteel, princess-like womanhood to morph, not unlike the Hulk, into the she-male leaders of the not exactly human Bonobo monkey tribe. They specialized, during their hey-day, in the sometimes abusive indoctrination of innocent young children into their anti-procreation doctrine sometimes referred to as “Fifty ways to kill your baby.” These pants wearing she-males don’t make Planned Parenthood videos, no siree, they cut to the chase and instead of Fruit-loops or Cheerios, they eat baby parts for breakfast. They are the most extreme of cultural icons, who spearheaded the “pro-choice” movement.

Nowadays, it would seem, many younger women are well-enough pleased to have won the benefits of the bloody “revolution,” but even more well-pleased not to have to be a part of the untoward, unfeminine, uncivilized war-like war that the feminazis waged, seemingly on their behalf. Therefore, while the country may be ready to accept a qualified woman applicant for President of the United States, voting for a woman just because she’s a woman, could actually land you in a special place in hell. Women today are smart, educated, and like to be pretty, smell good, and to have a good time with the boys now men they grew up with. They expect their politicians, and government officials, to do what’s best for everybody. They are already empowered, and if they want to pursue a job, WTF is the big deal? They just do it. That old bitch Hillary can wait, or not. Another woman who is qualified will come along who isn’t obsessed with the abortion mill, been there done that, and who understands that while passe social issues may still be important – there is no point in going for that job if it simply doesn’t exist. Personally, I’d offer my endorsement to Tea Leoni, who is certainly at least as qualified as Ronald Reagan. Actually, I’d go ahead and give Tea Leoni the higher scoring “A” than Reagan ever got.

There’s another twisted caveat in the equation. We all know who Barack Obama is. He’s the first (almost) black president. And lest I get myself into more trouble than I already am, to hell with it, I don’t think the feminist rights movement rises to the same scale in importance as the minority civil rights movement. Which is to say – while I didn’t vote for Barack Obama because of his political views, and in view of the fact that his presidency has largely been stalled and mired in controversial unimplemented policy – I can understand why black folks might have voted for Barack Obama for no other reason that running for president while being black. From my perspective, he did minimum damage while actually doing a pretty good job of restoring the Republican economic disaster.

So, if a little affirmative action in the White House has resulted in a better understanding of what the Constitution actually means, possibly bringing it to a more veracious fruition, then I’m down with that too. And after-all, a lot black folks is pretty smart, really, and many minority voters who voted for blackness might also have come away with a little bit of a sour taste in their mouth. They know, ultimately, it’s not supposed to be that way. So be it, we are potentially a better country. And a lot of those same minorities also recognize that socialism and social programs are not necessarily the same thing. The socialism of Hillary, and Bernie too, ain’t no good when it really boils down
to a larger plantation that swallows liberty and independence like the Borg.

In short, it could be that the whole minority equation with Barack Obama has transliterated itself into the psyche of voters, young and old, male and female, and black and white, whose political views now transcend the myopic extremism of social issues already settled – like forever ago – to a more comprehensive and modern concern for the broader issues that really do seem to be the most important to the future and well being of everyone, together, in this country.

And besides, I think a world where girls like to look pretty and smell good – instead of trying to bite your head off like one of the Walking Dead zombies would – is a better place after all.