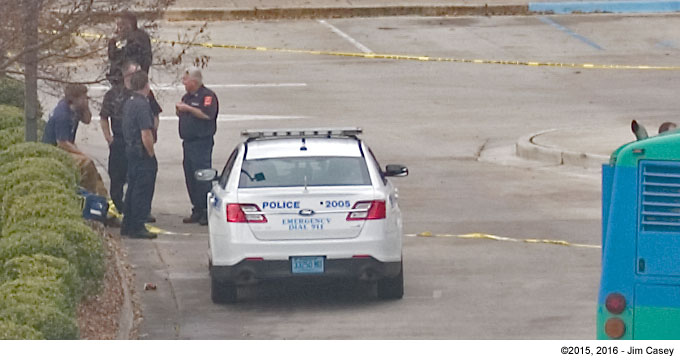 A few weeks ago, John Lee Bullard came up for his “felony exam” hearing. I have no clue what that is, it sounds akin to the process of indictment. Little was said in the media about that event, and it is apparently just another step in the usual process when such a crime has been committed. Mr. Bullard, you will recall, whooped up on Police Officer Ricky McCarver at the HSV Transportation Bus Station back on December 11, 2015. McCarver sustained non-life threatening injuries, apparently mostly facial lacerations, and was released from the hospital a short time later.

I have already written two columns on this subject, in the first I allege the event was deliberately pre-meditated and orchestrated, and in the second I criticize McCarver for what is obviously irresponsible protocol at face value. Since then, I have continued to review all the information that I have, and unfortunately must come to a resounding conclusion – McCarver martyred himself in order to entrap John Lee Bullard. The evidence is there to be seen, it just has to be put together in a larger context so that it can be evaluated correctly.

The first evidence is that McCarver was hired, according to news reports, about nine years ago. While I don’t have an exact date, that would put the beginning of his employment as a police officer at about the same time as the Lee High School Bus Murders. I believe McCarver is part of a supremacist caliphate within the City of Huntsville Police Department that functions as a cult, almost a religion unto itself, and that they orchestrate their illegal conspiracy with racist intent or to achieve ethnic cleansing, eradication or extermination – and then they “tag” it in much the same way other gangs who engage in illegal activity.

About the time of the Lee Bus Murders, they needed McCarver to be the “amplifier” in their metaphoric, all things digital, stereo system collection. I.e. their “gang tag” is “stereo-typing” by definition. The conspiracy time stamps itself as noted by the McAdvertising I have provided as evidence. Anyone old enough to anticipate the digital revolution as far back as the first four foot section of digital CD’s in Camelot Music, knows about the Telarc 1812 digital cannons, and the need for a clean, powerful, amplifier. For any audiophile from that time, the Carver “Cube” with it’s 400 watts per channel, and immaculately clean specs – was absolutely on the short list. McCarver got his “in.” 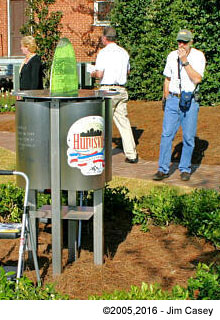 The 2005 Time Capsule bears a striking resemblance to a turkey roaster. The city employee standing behind the 2005 Time Capsule is known to be involved in illegal gang activity, and is believed to collaborate with the Transportation Bus Station employee in the photo below.

Also noted is the photograph above of vehicle #2005 which occupied the central and most prominent focal point at the Transportation Bus Station immediately following the alternation. Anyone “in on it” just arriving on the scene, i.e. other first responders, would understand the “code” insinuated by the vehicle number. It throws back to the Huntsville 2005 sesquicentennial, and the sesquicentennial throws back to the “time capsule” unearthed during the celebration. The time capsule was buried on the courthouse square in 1955 – when “Spec” Sircey was mayor of Huntsville, and that was a time when racism, discrimination, and hate toward the mentally ill, or handicapped, or homosexual was the order of the day. “Spec,” as in specification, is again a double entendre and a reminder that ethnic cleansing and eugenics is the (illusory) path to “perfection.” The HPD caliphate believes this, it is their mantra.

In the column “The Cannon Ball Run” you can see in the photograph that the proximity of the HSV Transportation Bus Station is immediately next to the Huntsville Depot, and in the magazine section showing the Depot Complex Maps you will also see that the original turntable of the Huntsville Depot Shops lies immediately beneath the HSV Transportation Bus Station of today. Which is to say two things. First to note the “stereo-view” of the original turntable, and the re-created turntable that is part of the HSV Depot Museum. The “turntable” itself, of course, is a metaphor for the audio equipment that preceded the digital recording and playback systems of today.

And you probably notice I keep using the term “Transportation” to describe the bus station instead of “Transit” as is the official name. That’s because today the Huntsville Depot is part of a museum complex that bills the facility as “Alabama’s Transportation Museum.” The name is a little odd, because the only transportation at the musem is that of trains, and well, those are specific.

You may have already realized that “Transportation” in the name is yet another underlying double entendre. The term “Transportation” is originally an English term that refers to a form of incarceration used to send “undesirables” away from Great Britain to live in Australia. Modern day Australia began, literally, as an English penal colony. Another use for “Transportation” as a means of incarceration, was in bringing slaves from Africa to the United States. Once in the United States, Slaves were “transported,” maybe by train, to Huntsville. Today, “Transportation” is considered to be an illegitimate and illegal form of false imprisonment. The Huntsville Depot and Freight building are believed to have been partially constructed using slave labor.

As mentioned, in the days of “Spec” Sircey, the racism toward minorities and the hatred of “undesirables” or those considered to be “infirm” often resulted in “transportation” of some kind, more correctly articulated today as “false imprisonment.” Back then it was easy enough for the powers in charge to impose their unconstitutional agenda on those they deemed as targets. Today, it may not be so simple, but in fact – it is till being done. 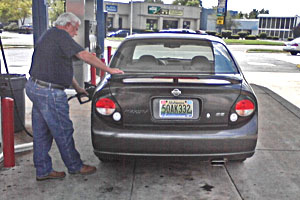 This man who works for the Transportation Bus Station is already known to be a gang member who engages in public hazing rituals.

This is the photo of a man who works at the HSV Transportation Bus Station. I already know that he has involved himself in hazing members of the public as part of his gang affinity. I cannot say for sure, but I believe he may have organized some of the people on the bus with John Lee Bullard to attack him as their target. This could include other black folks, as they are sometimes known to engage in hazing rituals as part of their own indoctrinations – or paper bag tests. This type of explanation also partly accounts for how the Lee High School Bus murders were accomplished, also involving bus “transportation,” and also in the immediate area, and can easily be likened to the Florida State University hazing incident when a band member was actually killed from the physical violence of a hazing ritual – on a bus.

It is my opinion, after considering and combining all these facts, that Police Officer Ricky McCarver who is a nine year veteran of police work, deliberately engaged in what appears to be irrational and irresponsible protocol that was actually per-meditated. McCarver followed through, knowing he would retain his standing among his affinity gang, and knowing that his injuries would be a minimum sacrifice – because John Lee Bullard was already known to be disarmed in advance. It is my opinion that John Lee was “boosted” and harassed and hazed by others prior to the incident, maybe on the bus, and maybe during the day elsewhere. It isn’t likely that John Lee Bullard would have attempted to engage two police officers in an altercation, but McCarver confronted him alone, when he was already a pissed off hair trigger, and like any normal human would be, he was ready to – whoop some ass. So, he did.

It is my opinion that John Lee Bullard, mentally ill, “cray cray,” has been targeted and subjected to systematic and deliberate provocation, entrapment, and therefore false imprisonment. John Lee has been eradicated.

As for Police Officer Ricky McCarver, any nine year veteran police officer who is that stupid, or that incompetent, or who simply cannot control his own algirythms is simply not fit to be a police officer. Or, he is guilty of a subversive conspiracy to deny constitutional rights, false imprisonment, and a host of other illegal activity. Either way you look at it, Ricky McCarver needs to exit to find another job in a capacity that he can handle, maybe making car tags in the federal penitentiary.

THE OBSTRUCTION OF JUSTICE

The Director of the HSV Transportation Bus Station is Tommy Brown. I do not know the extent to which Mr. Brown may be culpable. However, Tommy Brown manages a relatively small bus system that is less complex than a small burger joint, more like a large convenience store. and I wonder how his salary of over $100,000 is justified by the Tommy Battle administration. Note: the repeated duality of the name – Tommy and Tommy.

Under the Freedom of Information Act, and as a constitutionally recognized journalist, I have requested copies of the video, from Mr. Brown, that other media outlets have asserted as being taken both during the altercation on the bus, and later between Bullard and McCarver. Mr. Brown has declined to respond to my requests for that information. I do not believe other media agencies have successfully obtained that video either.

I have also requested from Mr. Brown additional information in regard to the Transportation Bus Station employee noted in the photo above. Again, Mr. Brown has chosen to be non-compliant with the FOIA, and has not responded to my requests for information.