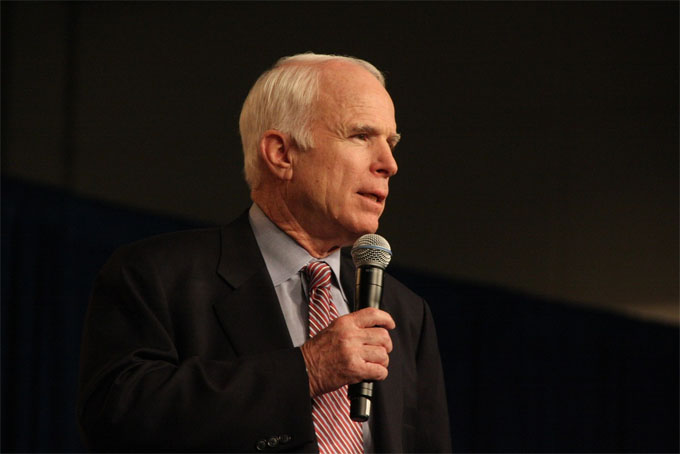 John McCain – Buried With His Moccasins On

John McCain, elder statesmen, dead at 81. I’ve heard it said that when it comes to criticizing Senator McCain – he’s kinda of slippery. When I started searching on the Internet to substantiate my less than impressive opinion of John McCain, I didn’t really find the kind of information that my anonymous sources were telling me should be there. By now you figured it out, I didn’t think nearly as highly of John McCain as all the accolades coming from both sides of the aisle. (In the interest of disclosure, I am not a veteran.)

Was John McCain a hero? Well, I don’t think I would’ve been as harsh as President Trump, but – no. There is no heroic act in being captured. There are people who actually do something heroic everyday beyond the face value call of duty. He served with valor, and maybe invoking the Viet Nam War is part of my ambivalence, because while I honor veterans who serve in good faith, Viet Nam always invokes ambivalence and frankly since seeing the series by Ken Burns – contempt. But, that’s a different discussion. McCain served honorably, but the most “heroic” thing I see is that he stayed behind as a POW when he could’ve come home. But, you could even second guess that action as being self-serving and offering little real value to his buddies, and arguably bringing a bigger potential for harm to them.

I heard one news media pundit say how important it is to the troops in the military, whether active duty or POW, to hang onto the idea of the unqualified honor, respect and adoration they can expect once they return home. No doubt, this is probably true. But it is also true that many myopic young people enter the military with grand illusions and an unrealistic sense of entitlement upon return. That fake and magical encouragement can then have negative consequences for the vet and the community when they do return.

Today, it doesn’t seem to be quite as bad as it was for the Troops returning from Viet Nam who got their feelings hurt sure enough. It was a nation in turmoil for a lot of reasons and anti-war sentiment ran high back then. DON’T, MISUNDERSTAND. Veteran’s deserve certain benefits, sometimes that they don’t even get. And they deserve job opportunities and success in life. And yet, many end up homeless. Even still, and maybe because they are feeling disenfranchised, I’ve also run across quite a few veteran’s, many even quite successful, with a sense of entitlement that goes beyond their legitimate privilege and that becomes a caste unto itself with the intent to exclude others arbitrarily. Obviously, that is not American, or heroic, or acceptable.

John McCain appeared to be a respectable statesman. My anonymous sources, however, tell me that there was another, publicly unspoken side to John McCain. One that was involved in the abortion war, the sense of caste and entitlement by some veterans, racism, aristocracy, classicism… and eugenics. These are not the concepts you find much of when searching the Internet, and yet telling enough, there does seem to be a vortex swirling around John McCain that suggests there is a dark side to his personal conduct that isn’t reflected in the statesmanlike image portrayed by the media.

John McCain was decidedly pro-life, although he did recognize certain exceptions for abortion. But, it does appear that he was eugenics minded with, or without abortion.

Here are some interesting points to consider:

APNewsBreak: The University of Arizona has accepted nearly $500,000 over 16 years from a foundation that has promoted eugenics. https://t.co/zZTL5azM0K

What I didn’t find on the Internet is any comment by McCain, or any attempt to denounce or curtail the acceptance of the funding.

NO ONE wants to answer questions about the snub to Palin including Sarah Palin, to whom I sent an email asking for her take. So, it is speculation on my part to suggest that the bad blood has more to do with Trig, her son born with down syndrome, than it did their failed campaign. Perhaps the mother of Trig is persona non-grata at a “holy” event like a funeral. It is also unclear as to whether Ms. Palin was excluded by Senator McCain, or subsequently by the family.

Of course, staunch rival Barack Obama was also invited and although he is more opposition to John McCain than Donald Trump, he attended and delivered a eulogy. Obama, however, hasn’t answered my tweets asking him if he was aware when Michelle Obama utilized test tube engineering for their kids.

Perhaps ironically, Gabby Giffords was invited to the funeral, and last I heard, she accepted. She is a previous U.S. Representative from Arizona, and this is a really stinky part of the McCain swirlie. My anonymous sources tell me that Ms. Giffords was targeted by a conspiracy with intent to censor her vote in Congress in regard to Obamacare. Jared Lee Loughner was another is a list of mass shooters that was a brainwashed sleeper. The exact intent of that crusade is not clear, however, it is a spotlight and ends up on gun control and eugenics.

And then there’s the stinky connection to Houston and NASA…

A deadly crash involving a semi-truck and a Greyhound bus on a New Mexico interstate has claimed at least 7 lives. https://t.co/xRr7PaSuUD

And yesterday’s commercial transportation crash in New Mexico. “Transportation” a type of false imprisonment, is a fundamental tactic often utilized in euthenics. The bus crash that killed “8” people was in the state of New Mexico an immediate neighbor of Arizona. It may seem a stretch to suggest this “blood signing” had to do with McCain’s funeral. On the other hand, the coordination and political statements made this week had to be organized and choreographed in advance. Call it conspiracy, call it “deep state,” call it “vast right-wing conspiracy,” just don’t call it the “American dream.”

Planned Parenthood is functionally, if not officially, practicing eugenics. They should not only be federally defunded, but shutdown & criminally prosecuted for conspiracy. Unfortunately, as you now see, neo-Naziism does appeal to many ultra-right t-party type republicans.

And it can’t be overlooked that McCain cast the final vote that didn’t repeal Obamacare. Obamacare is the underpinning of compulsory eugenics in the future.

It isn’t nice to say bad things about a dead person who isn’t even buried yet but, I don’t think eugenics, ethnic cleansing and genocide are nice things, and all the same thing as far as I’m concerned. Neo-nazi conduct isn’t nice.