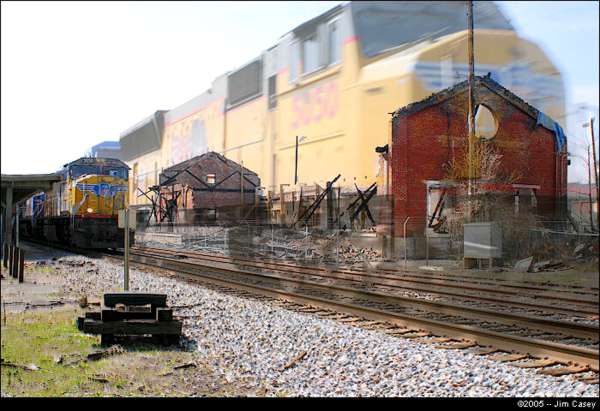 I would like to tell you about all the planning and expensive equipment that went into capturing this shot, well actually two shots, but I really can’t. It was strictly serendipity. Some time after the Huntsville Depot Freight Building burned down in March of 2004 I was out taking some shots of the ruins when as chance would have it a freight train happened by.

I was standing across the tracks, focused on different angles of the burned out Freight Building, and frankly was caught a little off guard. Having a little bit of time to decide where to attempt to capture the speeding train, placing the Freight Building at just the right spot in the background, seemed like the right idea. And, the shot wouldn’t be too tricky given my experience with the camera. Even still, I knew I would have to squeeze the button with split second timing.

My timing for the first shot was absolutely perfect. Since I was pivoting to follow the train, not even a tripod, I simply fired the second shot as quickly as I could, without really knowing if I or the camera would respond quickly enough to get a good frame. As soon as I took the photos I knew the first shot was pretty good, but I also considered the second shot to be a loss because it completely blocked the Freight Building, leaving nothing but a relatively nondescript speeding locomotive as the subject.

It didn’t occur to me until later, when I was looking at the photos on my laptop, that the second shot in the series actually was perfect. So, as it turns out, digital cameras and computers aren’t exactly cheap, but I still have to admit the shot wasn’t planned. Me and Photo shop did the rest.

Completed in the early 1860’s, the Historic Huntsville Depot was the Eastern Division headquarters of the Memphis & Charleston Railroad. The Freight Building was completed before the Main Depot and when it burned down in March of 2004, it was considered to be the oldest operating railroad building in the U.S. Both buildings were involved in the Civil War as strategic targets in the Confederacy.