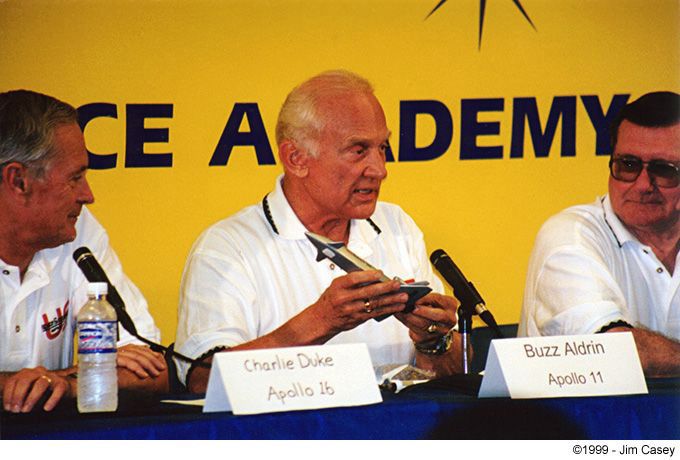 NASA Astronaut Buzz Aldrin discusses the X-33, while holding a scale model, during a press conference at the USSRC in 1999 during the 30th anniversary of the first moon landing. Mr. Aldrin poignantly stated that the X-33 couldn't fly because of it's design. Ultimately, it never did.

icon-quote-left The technology for launching a single-stage vehicle is just too far head of us for now. — Marshall Director Art Stephenson

The timing may be none too soon. As if too mark the end, and apparently with NASA’s blessing, Danny Golden turned in his resignation as NASA Director just a few weeks ago. I guess in the wake of the 911 attack on the WTC, not many people were really too concerned with the significance of that single gesture. Then again, I can’t really remember any seriously critical commentary on the American sacred cow. It would somehow be sacrilegious, I suppose, to really lambaste the space agency, whose original mission was the stuff of such historic significance and inspiration that certainly there is no rival of in all of human history, save that of the miraculous birth of the Christ.

Hollywood has also been too grateful to be critical. Just look at all those wonderful space films, and space monsters, and space crafts, and Star Trek, and aliens, and time warps, and macro scopes, and telescopes (even if hubbled and myopic in real life), and the dreams, and the inspiration, and the action figures, and ad infinitum. The dreams and inspiration have translated into more than a few material goods for the masters of the silver screen.

The same holds true of the median empire. What journalist worth his salt could possibly be more concerned with the waste, and the abuse, and the phony facade, and the failures, than with the stories, articles and columns, written in the shadow and with the blessing, of man’s greatest venture of all time. The greatest of all possible muses. Roll out the crystal carpet! The great unknown of outer space, conquered by man. To be a team player, one must be a supporter of the team. And who that ever shaketh his spear upon paper would even need to be chastened of being negative. Nay indeed! To be a part of the great venture, to be a cheerleader, and a supporter, and a fan, has been far more alluring than playing the role of devil’s advocate. I guess there have been nay Sayers in the past, but certainly they have been few and far between, and largely silent, either by their own device, or the by the even mightier sword of the great censor called “editor.”

Now, indeed, the writing doth seem to be on the wall. The Wall Street Journal that is. As an icon of money and riches and wealth that is. Wealth to the tune of one billion dollars for the ballyhooed X-33 program. The thing was supposed to take the place of the shuttle launch system, providing a way to take off and land all in one and the same piece. Now, after five years and one billion dollars, Marshall Director Art Stephenson says demurely, “The technology for launching a single-stage vehicle is just too far ahead of us for now.” Shucks Art, its only money.

Now, after a string of other failures including two crashes on Mars, lost satellites, and the Challenger disaster, the 75% complete X-33 is being handed over to the Space Launch Initiative, and being dismantled for more efficient storage. Presently the unused museum piece is stored in a hanger where Lockheed Martin has been paying $450,000 every three months in tax payer money for rent.

Now, lets looks at those numbers a little more closely. The montly rent breaks down to $150,000. I’m sure that most NASA/Lockheed employees enjoy living in a home that is worth more than that much. Many more folks, however, can’t afford to live in a home that would cost as much as they have been paying just to keep the fancy, unusable airplane in its hanger. So, look at it this way. Every month for the last five years, the monthly hanger rent on the airplane could buy 3 modest $50,000 homes. 5 years x 12 months x 3 per month = 180 homes that could have been bought and paid for using just the rent on the hanger for the project that is being dismantled as scrap.

What a Billion dollars can buy

Happy Thanksgiving and Merry Christmas Danny boy, enjoy that turkey and ham you’re eating, and many more. But truth is, I think just maybe it is about time to reconsider the mission, and the scope of our national space adventures. It seems to me that for all it’s been worth, there are now more pressing troubles right here on earth that outweigh the balance of considerations.