Gold At The End Of The Rainbow 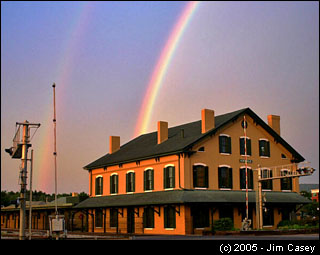 Here’s a shot I decided to dig out of the morgue. Some believe that Goodbye Yellow Brick Road was somehow
inspired by the Golden Brick Huntsville Depot Museum. Bernie Taupin is known for his clever metaphoric lyrics,
but I don’t know if the reputation of the Depot goes beyond Huntsville…

2005.07.06
The Huntsville Depot (Museum) located in Huntsville, Alabama was constructed in 1860 and served as the Eastern Division Headquarters of the Memphis & Charleston Rail Road. The building is rich in history and was a strategic target during the Civil War. Painted a bright yellow gold sometime after the turn of the century, the structure is historically significant locally and nationally.

On this occasion, it would seem that the rainbow did indeed lead to the Depot of Gold, as evidenced in this photo taken by Jim Casey on Wednesday, July 6, 2005 when the remnants of tropical Storm Ivan allowed a sliver of sunlight through just at sunset.