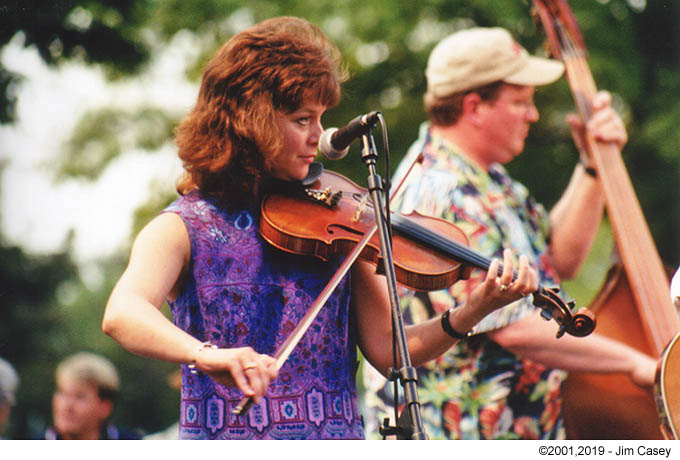 These recordings were made at the Huntsville, Big Spring Park Summer Concert Series in 2001 on August 13 – just a month before the 911 terrorist attack on New York and the Trade Towers.

I had recently purchased a laptop computer and decided to also buy a good quality microphone, and then to record that summer’s Concerts in Big Spring Park. Not many folks had any sort of portable digital equipment at that time, and even I had not yet bought a digital camera. The photo above was taken with a 35mm slr and subsequently scanned.

Digging through all my material archived off-line, there is good news and bad news. The bad news is that the primary recordings of all those concerts is corrupt. The good news is I made one and maybe two more backups that aren’t – and digital is digital. Note on the “Doolie” track I’ve indicated “DDD” which may be a passe marking now, but when CD’s first started appearing they usually indicated how the original was recorded and processed, A for analog and D for digital. Hence, many older CD’s will have a label AAD or ADD and finally DDD.

Doolie is also marked as “stereo” which it now is. However, it was originally recorded directly to my laptop in Big Spring Park at 44k, 16bit, mono – nearly the same as a non-lossy cd. So, even though the ambiance of the concert lacked a lot of base response, the original recording is rich and accurate in audio information. I also have “Cool Edit” which is a high quality audio editing program that I used to duplicate the original track into two tracks which I then enhanced just a bit to synthesize stereo sound. Alas, I’m not a studio technician and my audio editing skills are unpracticed, so I only tinkered enough to enliven the quality a little and the spacial quality is subtle.

A final note, or maybe not exactly. Back around that time I made alot of video and audio recordings. I’ve already presented many composites of the video but the real prize I was after is the essentially unprecedented, high quality audio. For a number of reasons, I decided to put the cd’s on the back-burner and wait for the 20th anniversary of the 2001 Summer Concerts to make some sort of presentation – you know, nostalgia. Well, that’s just two years away and there’s a lot of work to do! Although, I still haven’t decided exactly what, or how much of each concert to present.

There is also one more good news to report. The video I made of Pinhook Creek in 2002 at the Summer Concerts is in good condition, and as luck would have it, I actually saved it’s backup in a good quality 320×240 avi format. So again, while that’s not great by today’s video standard, it’s actually much better than was practical for the Internet at that time. The original Internet presentation was only 192×144 and I’ll be able to upscale the backup to 640×480 with pretty good results – in the near future.