As noted at the top of this page, this video and article was originally presented in October of 2002. The mp4 presented here has been produced using the original avi file which was 320 x 240 at 30fps. So, still not quite as detailed as the 110mb avi file, but pretty close. I’m not recreating this page exactly as it was originally published at this time, which was a frames based presentation that included several snapshots of the depot and freight building. I have published other articles about the Depot and Freight building, noted below, and will eventually get around to rescanning and editing a slide show of the freight building.

The location will also serve as the new central terminal for the Huntsville Shuttle, according to Public Transportation Director Tommy Brown, who said that it will host an additional building for transfer waiting, complete with vending machines serving refreshments, and seating for Shuttle Riders. The new facility will provide overnight parking for the Shuttle Busses.

In an interview with TOCC.tv, Mr. Brown denied that the project had been kept secret — which is technically true. However, scarcely little notice had been given to the project, with heavy digging equipment rolling into the site just a few weeks after an article appeared in the Huntsville Times announcing federal funding for the project.

The new facility will be anchored by a 20,000 square foot, two story building. The Convention and Visitors Bureau will dominate the first floor where there will be public access for visiting tourists, with the Public Transportation offices residing on the second floor. The cost of the entire project, according to Mr. Brown, is expected to run around 3.4 million dollars — 80% of which will be federal subsidy.

Why the hush? Simply put, the City of Huntsville wishes to avoid disruption of the project because of it’s sensitive location directly on top of the original site of the Huntsville Depot Engine Shops and it’s TurnTable. (See Maps.)

Huntsville insiders already know that the Huntsville Depot Museum, and the future development of the attraction, has been a sore point of contention for some historic oriented groups in the city.

The Historic Depot, which is now a museum, was in fact a strategic target for Union forces during the Civil War. The facility was captured when Union General O.M. Mitchell marched into Huntsville in April 1862. There was little fight over the Depot at that time — ironically, probably less than there’s been since then.

Having formerly been employed by the museum, as marketing director, I take this opportunity to say that I too take umbrage with what I consider to be disgraceful mismanagement of the facility, and the neglect and abuse of the artifacts entrusted to it’s holding.

Once called upon by the Board of Directors to put forth my vision for the future development of the Museum, I can safely and honestly say that my projections for facility enhancement, are the primary reason why my services eventually became unneeded by the Museum. It may also be interesting to note that the museum was run at that time by a board of directors, chaired by Guy J Spencer, the former husband of now Mayor Loretta Spencer.

A few years ago, under inexplicable circumstances, the Depot Board of Directors was disbanded, and reign of the facility was placed under the Early Works Board, with Dana Lee Tatum at the helm. In the opinion of this author, mismanagement, and inappropriate management, has become markedly worse under this arrangement.

All those assertions having been made, my own contentions about the future of the facility have little or nothing to do with the Civil War involvement, which usually seems to be the focal point of dissent for other groups. In retrospect, it now appears that the Civil War aspect has been deliberately accentuated by the powers-that-be, in order to create a situation so sensitive as to be “untouchable” and thereby clear the way for development of the new office complex.

The fact is, the Depot Complex played an enormously important role in the early growth and development of Huntsville all the way into the 1950’s. All that has been traded off ostensibly because of perpetual feuding over one night in 1862. It’s a sorry shame that areas on “the wrong side of the tracks” have been permanently taken out of the equation for possible expansion of the facility as a Huntsville Museum and attraction.

A testament to this point of view is the Freight Building — still standing since it’s completion in 1860. As recently as ten years ago, the claim has been made that the facility is the longest operating RailRoad building in the United States. It wasn’t part of the “historic” designation officially enjoyed by the Depot, and so it stands, rotting, decayed, and not long to falling down on itself. (See Photos.)

It is believed that the City of Huntsville actually took ownership of the Freight Building a number of months ago, but efforts to confirm this assertion have not been answered by City officials. One source, who spoke on condition of anonymity explained: “The City owns it so Norfolk Southern RailRoad won’t have to pay taxes on a building in use.”

Fair-enough from Norfolk’s perspective, but why would the City bother purchasing the building if it doesn’t intend to renovate and save it? Simply enough, no one notices what’s always been there. Avoid it long enough, and it WILL fall down on top of itself — probably without causing any public notice or involvement. Quiet, hush, quiet.

TOCC.tv also contacted the Alabama Historic Commission — a state government agency in regard to the current construction project. Their approval, or disapproval, would be required for any project on an officially, federally designated, historic site. TOCC.tv was informed that the location did not fall within their jurisdiction.

During excavation in preparation for the foundation of the new construction, many artifacts were noted that likely were from structures originally built as part of the Shops complex — a great quantity of hand-made bricks, large cut stones, layers of slate roofing, were observed being loaded into dump trucks and being hauled off to an unknown location.

Parts of the original TurnTable machinery was said to have been salvaged and saved when the facility was originally shut down, and some of those parts are supposed to make up the replication that is now part of the Museum facility. Exactly what, and how much of, is questionable.

A new transfer facility has been needed for the Shuttle Transit system, and this location will certainly serve the purpose — whether the site is appropriate or not.

The present terminal is located at the corner of Church and Monroe, on part of the Depot Museum parking lot. The waiting area is too small and is really nothing more than a 10 by 15 foot out-building, spruced up a little, with an almost hopeless air conditioner/heater window unit.

Although the new facility will apparently be improved, Shuttle riders should be aware that the new waiting area will NOT be a part of the main facility. Another structure will be built apart from the offices for passengers.

With more than three million dollars being spent on the new facility, I asked Mr. Brown if additional canopies would be provided at other busy points on the bus routes. Currently, more than 90% of the bus stops have absolutely no shelter for waiting riders what-so-ever. Riding a bus when it’s raining, means waiting in the rain. Mr. Brown indicated that the new phase of the 3.4 million dollar development does not include additional shelter for Shuttle Bus Riders. After prancing around the issue somewhat, he indicated that there were hopeful plans for shelter at pick-up stops — maybe next spring.

The video presented here shows the excavated area prior to being filled in again. Subtitles have been added to indicate what kind of artifacts were found in that paricular layer. Unfortunately, because of the detail involved, this is probably the most challenging sort of video for Internet streaming. An uncompressed version (avi 320 x 240) is available ($20.00 plus $4.00 for shipping and handling) if you would like a more detailed view of the artifacts:webmaster@tocc.tv 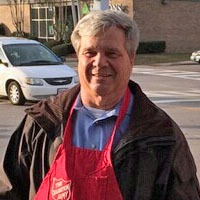 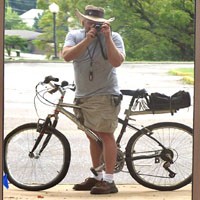 The scene of the crash was surreal and oddly quiet when I arrived. Paramedics, police and good Samaritans comforting, the injured, shaken up and in shock. Students held cell-phones to their ears calling home… 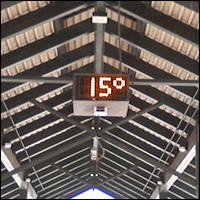 After reviewing all the information available, it turns out that the current Huntsville City Transportation Bus Station is built immediately on top of the original Huntsville Train Shops that were built around 1860. In fact, it seems highly likely that the digital time and temperature display located in the center of the bus terminal awning, is just about exactly in the center of the original turntable location. The point of impact of the Lee High School Bus, when it fell from the sky like a bomb, is also marked on these maps. Check it out. 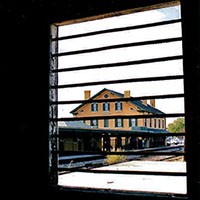 Which really just leaves a bunch of unanswered questions. Who owns the property? Is there even any hope of restoring the building? How can the City ignore what has become not just an eyesore, but an extremely dangerous attractive nuisance? (There was a death in the building recently, about 2 years ago, that was investigated as a suicide.) Early Works recently indicated that funding has been received in order to do major renovations to Constitution Hall Park, but no mention of the Historic Huntsville Freight Building was made. 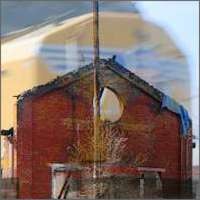 I would like to tell you about all the planning and expensive equipment that went into capturing this shot, well actually two shots, but I really can’t. It was strictly serendipity. 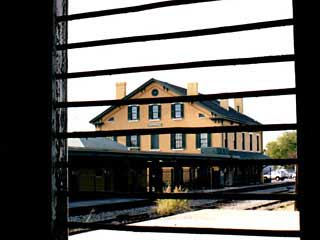 Of course, the passenger train hasn’t stopped at the Huntsville Depot for many years, and
although freight trains still run down this track, little freight is downloaded
here anymore either.