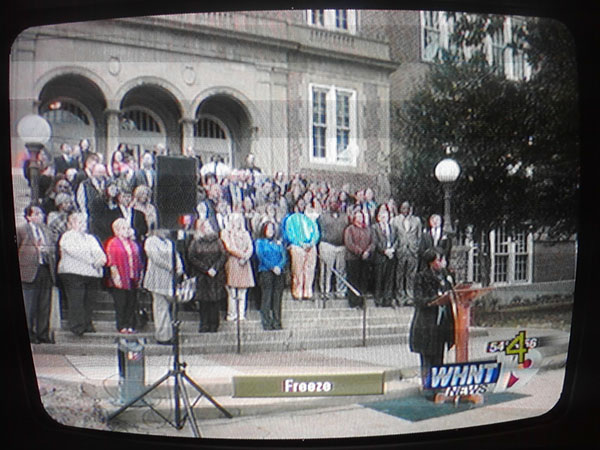 Woe Plessy…! If ever a picture was worth 750,000 words, this one is surely it. Nowadays it isn’t hard to get up a few Uncle Tom’s to make a picture like this, a shameless and unabashed echo of George Wallace’s infamous school house stand in 1963. These folks are educators, PTSA, and Chamber of Commerce members standing on the steps of the Annie Mertz Center, headquarters of Huntsville City Schools. They gathered yesterday to stand in support of Superintendent Casey Wardynski and the BOE.

The Department of Justice recently declined a request for rezoning by the Huntsville Board of Education saying the new plan doesn’t do enough to integrate schools that are predominately of one race. Superintendent Casey Wardynski and the BOE president, David Blair, have responded by explaining how much progress the school system has made in recent years – in spite of apparent attempts to continue and advance racial segregation. A policy of “Separate but Equal” by definition. That reality has sparked sharp tongued responses from black members of the Madison County Commission and City Council.

Having been a nearly lifelong resident of Huntsville, I’d like to say that the provocations by Wardynski and the BOE are simply a good educators attempt to shine a continuing education light on demographics in Huntsville and the City Schools, but I can’t. The fact is Huntsville, while enjoying rapid growth for more than forty years, is an Old South town with festering pockets of racism and segregationist sentiment. I have witnessed what I would describe as a second generation (once removed from the sixties) sneak ambush on the constitutional policy of equality and access – beginning with bracket creep segregation. While economic growth cures a lot of ills, it has also facilitated growth of those areas of town where separatism was already prevalent, into larger insular city hubs that are no longer just segregated bedroom communities, but now by default, where all aspects of daily life have become segregated as well.

I haven’t really lived in those parts of town, and I am chagrined when I come across someone who has. When it comes to issues of economics, race, poverty, access, and equality, it’s like talking to a brick wall. Unless it’s a white woman, and then there are two things she knows about; her equality in the workplace, and her rights as a mommy god – still a brick wall. Otherwise they all have a very small, homogenized, neighborhood concept and little or no real experience on which to base their political or social opinions. They really don’t know. And that’s the answer to the unasked question of why not. Ignorant people who presume to guide public policy – not unlike Tea Party Zealots – make bad and even dangerous decisions that are ultimately self-serving and myopic. Their grand kids will end up paying for it.

People like Tommy Battle do know, however. But you have to remember that the aristocrat is never really too concerned with all the rest of the bourgeoisie of their own race. When it comes to ripping off thine brother, they really do believe in equality. At the same time, it isn’t hard to see that the separatist bracket creep is rooted in real estate development, facilitated by rich Old South land owners who weren’t really a part of the civil rights movement of the 1960’s. They just sat back and waited for it all to blow over, and then followed as the oil and water separated, and profits from development went up. And, thank Gawd for W Bush. He’s the one who ignored the ever growing flood of illegal foreign nationals into this country to begin with. If there’s anything rich real estate developers love, it’s a profit increase from slave labor construction… and increased values in blossoming apartheid neighborhoods.

Here are some more thoughts on Casey Wardynski and the BOE, and as related to growing cultural and ethnic problems in Huntsville:

Casey Wardynski And The DOJ: Survey