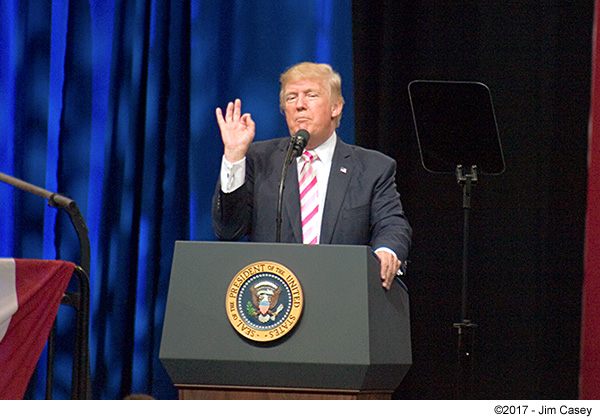 This is an amazingly easy call considering it comes from someone who hasn’t endorsed a presidential candidate in 25 years. It comes about by reviewing the realities on both sides of the equation. It boils down simply and plainly. The future of constitutional democracy, liberty and freedom is literally on the line. Donald Trump is not perfect, but he must be reelected and therefore receives my endorsement.

There have been several times I haven’t agreed with Mr. Trumps decisions. I haven’t been able to get fully behind any of his Supreme Court picks and, unfortunately, Ms. Coney Barrett follows the pattern – more on this later. I still firmly oppose rescinding the Johnson amendment, although, separation of Church and State is imbued into the constitution and it shouldn’t be necessary to restate the obvious. I am opposed to undermining net neutrality by Agit Pai and the FCC. In some cases Mr. Trumps decisions have been political compromise that makes some sense, in others, no so much.

In spite of the false incantations by the extreme left, Donald Trump has not done one thing or uttered one word that could be construed as racist. In fact, he’s known for hiring diversity in his personal businesses and has gone out of his way to support black business people. Building the wall is the right thing to do – for everybody in this country of all colors and genders. Immigrants are welcome here, but they must enter legally. He shut down entry from countries known to export terrorism, that’s not racist either, I remember 911. He understands that a strong economy creates jobs and tax revenue and less strain on social services, making it easier to address the needs of those less fortunate.

And the reality is, his response to the China Virus has been exactly correct as he ramped up production of ventilators under scrutiny of “not enough” when he correctly predicted the new equipment would be available for export to other countries when the demand didn’t materialize in the U.S. Liberals called for him “to do something” while at the same time they shouted “it’s not your jurisdiction.” They said “make a plan” and then said “the vaccine is being rushed.” In the mean time, the carnage in New York escalated because of irresponsible if not malicious decisions by Governor Andrew Cuoma and Mayor DeBlasio. The staggered non-uniform approach has allowed the virus to “wash through” a few states at a time eliminating the overwhelming crush that would collapse medical response if it happened everywhere all at once.

Then liberal demonstrators took to the streets to protest, albeit with justifiable cause. And then, the extremist did what they have been doing since before the last election. They became violent and destructive without provocation. Portland was literally occupied by leftist guerrillas for more than three months. CNN Center was threatened in Atlanta, while Black Lives Matter protesters burned down a Wendy’s serving their own neighborhood and predominantly employing black people.

I do think Mr. Trump should encourage law enforcement reform, but the violence and destruction are not justified. BLM doesn’t own the quest for civil rights either. Many white folks have legitimate grievances too and BLM further foments segregation and disenfranchises white people when they assert it is only their issue. Mr. Trump recognizes that it is more a cultural problem than it is a racist problem. Hence, his support of black businesses.

There have been many twists and turns in Mr. Trump’s first term that I wouldn’t have expected. His rhetoric and name calling has seemed a little mean spirited at times but is mostly benign with no real consequence. The surprise is that he has successfully flushed out the nut-bags and extremists on the left. I’ve always been aware that there were socialists on the fringes. Maybe even a few communists. But what has become more and more obvious is that the extreme left has no pretense of civil rights or social well being. They intend to overthrow the democratic system and install a fully fledged socialist system. If the leftest guerrillas and the occupation and burning of Portland didn’t open your eyes – you’re a damn fool or one of them.

The rest of the extreme leftest equation is that Joe Biden isn’t necessarily sympathetic to the needs of the people as much as he is to the liberal elitism that would create a caste for his kind to lord over. Joe Biden, the “great white hope” of black people and diversity is so out of touch with the downtrodden masses he portends to offer salvation to, it’s really too sad to even laugh about. He’s a racist joker. Even though the likes of Nancy Pelosi isn’t running, her interjections into the political clime have also revealed her liberal elitism. They have obviously opposed the border wall because they will loose the cheap labor that supports the California plantation system. She wants a 747 to fly coast to coast but obviously scuttled recent attempts to pass an emergency stimulus with individual checks by pricing it off the table. They lie, cheat, flim flam and steal. They are ridiculous, self-serving and clearly intend to claim their place in the caste of the socialist elite by transforming our nation into the tyranny of socialism.