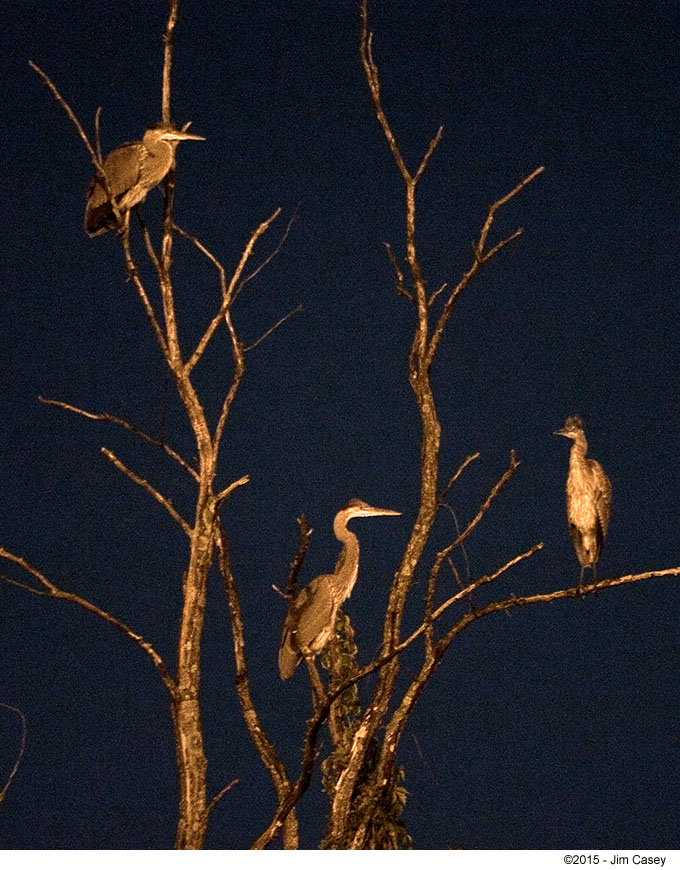 You may recognize these birds as being the subject of the recent TOCC•TV cover – Vive La France. The cover stands on it’s own, but I decided that I should attempt to process this shot in black and white, and then present it here in the photography section. Well, converting it to black and white didn’t work so well, so reprocessed it trying some different methods to get the better result. And, I have updated the cover to reflect the editing changes as well.

And, you would also be correct if you suspect that these are some of the large crane like birds mentioned in the photographic article Long Legged Birds

Did I do my homework on this one? Heck no. They look like what I think a Blue Heron looks like and so that’s what I called them. I’m not really sure. Here’s what I do know. These birds are rare in this area, and if you actually see one, you probably won’t see more than one, or two if you’re lucky, at one time. I ’bout fell out when I went out one evening, well after dark, and found these three roosting in the trees. Perspective on the shot might be a little difficult and so I’ll tell you. First, I took this shot at about 75 yards away, and the birds are about 50-60 feet up in the trees. I’ve seen these guys in this area before, and know that they like roosting here. I haven’t seen a “nest” and don’t know enough to look for one, but I also assume they are nesting here since they like to fly in around dusk and apparently stay for the night. Because I’ve seen them in flight before, I can also say that their wing span in huge, at least six to eight feet.

I had suggested that the birds in the Long Legged Bird article might be juveniles to this one. Now that I’ve taken the time to compare the two more closely, I come to the conclusion that they are not the same birds. The smaller bird just doesn’t have the crane like neck that the Herons do, and so that means I have actually seen four different types of water birds. Two of the chicken sized, and two of the the crane like birds. The other chicken sized bird looks very similar to the Long Legged Birds in size and shape, but the markings are quite different especially noting darker colors with a rufus breast. The other, larger crane like bird may actually be a crane, because while it is also about the same size and shape as the larger Blue Herons, the crane like bird is a solid white. And, I’ve also only seen it one time as well.

I felt this to be a remarkable shot for several reasons. The rarity, getting three in one frame, the distance away, and the distance off the ground up in the trees. It was well after dark, shooting max f-stop and zoom at a max 300mm for a 2 second exposure at 800 iso, on a monopod steadied against a nearby fence. After the fact, I found I actually over exposed a little bit, but all in all I can’t complain too much about the clarity and sharpness of the focus.

You might also wonder. I have indeed attempted to get a frame of just one of these guys in daylight, or in flight. They are very sensitive and very finicky. Whenever I try to sneak up on them in better light, I can’t get closer than twenty yards before they take flight, and I swear they seem to know I’m shooting at them, because they always seem to head in a direction where I can’t even get a good shot as they leave. If I was Art Wolfe, I suppose I could study them a little closer, and then lay-in-wait for their late afternoon arrival. But, there’s just not a lot of room on broadcast TV for lone Wolfe photographers. 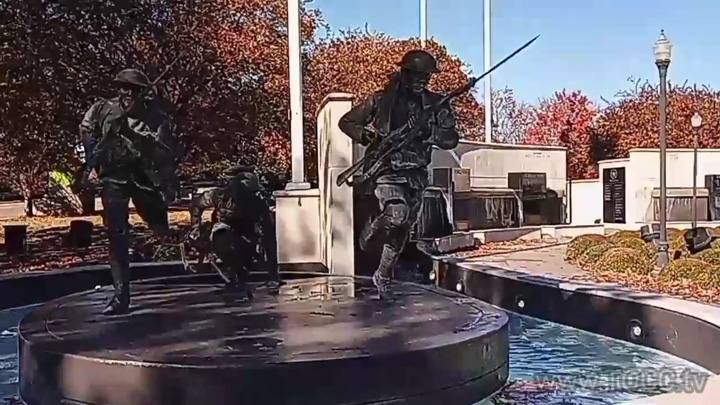 TOCC TV is undergoing a transition and upgrade with more video that includes live streaming. Check out this originally live streamed video tour of the Veterans Memorial and Depot in Huntsville.