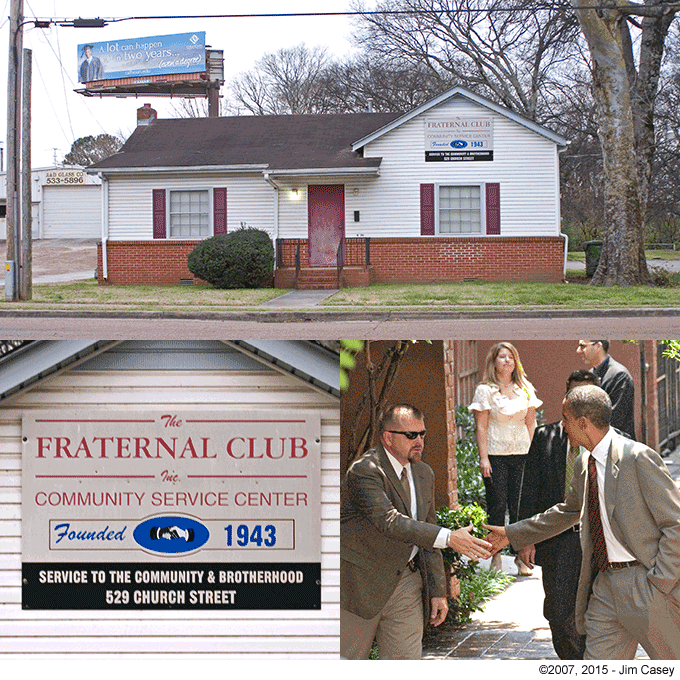 The photo on the right of Barack Obama was taken when he visited Huntsville in 2007 during his campaign. The photo on the left is of the Fraternal Club located on Church Street downtown.

The photo on the right above is of Barack Obama on September 9, 2007 when he made an appearance at the Heritage Club in Huntsville during his campaign for president.

At the time, I thought it odd that he would suddenly make a very deliberate effort to reach out and shake hands with what I assume to be a secret service agent. Could be a county detective, but even still, it seemed out of character to me. Either way, it seemed he was posing for my benefit, which might bring on some secondary possibilities that would explain his particularly magnanimous behavior – for a hack photographer and a shade tree website builder like myself.

Bearing in mind, this scene was nearly one year since the Lee High Bus massacre had occured on November 20, 2006. However, the pose he is striking bears a remarkable resemblance to the photo on left above, which is of the sign overhanging The Fraternal Club located on Church Street in downtown Huntsville. Now, I don’t know much about The Fraternal Club, except what is obvious at face value, and that is that they are apparently a community service organization with an orientation towards diversity – hence the white/black handshake(s). What isn’t immediately obvious in the photo is that The Club meeting house is located on Church Street immediately across from the sidewalk noted in the article The Cannon Ball Run, and just about 50 yards from where the Lee High School Bus hit the ground as though it had dropped from the sky like a bomb.

I also know that their membership is apparently mostly black, as I have noticed passing by from time to time when they are sometimes seen out behind the building having a bar-b-cue and get together. They seem like a nice bunch of folks, and their commitment to diversity seems genuine to me, as they invited me to speak to an audience of their members when I ran for mayor back in 2004. While I am now running “write-in” campaigns for what-ever office is currently on the ballot, in 2000 and 2004 I went through the official qualifying process and my name appeared on the official ballot during the municipal elections.

The Presidents Club
Far be-it for me to suggest that guilt by association should be considered as the end of the investigation, because, as it happens I have my own associations to offer to this conspicuous battery of likenesses. You see, I was the Senior Class President of the Class of ’80 back at my high school alma-mater – S.R. Butler High School. That seems innocuous enough by itself, however, one option on our class rings back then was a feature that had been suggested to me, and that I approved, and included on my own class ring. That is, on one side near the bottom in the well, there was also a handshake.

It wasn’t possible to to differentiate black and white on a golden class ring, and so what was intended as a gesture of good faith and brotherhood to all classmates, the handshake option was fashioned after the “soul shake” often used as an alternative to the usual handshakes seen in the photos above. Unfortunately, I no longer have my ring, or I would include a photo of that feature here for all to see. The good news is I sold the ring when gold prices were very high, and got nearly three times what I had originally payed for it. (If any of my classmates have their ring with the “soul shake” and wouldn’t mind, take a photo and send it to me and I will update this article to include the shot.)

Lest anyone suggest what might appear to be inconsistency in saying it was all a conspiracy while saying guilt by association isn’t enough, please notice that I assert the “soul shake” on the ring had been suggested. As class president, it was ultimately my decision that the option be made available. But who made the suggestion, I do not remember. God knows, there are a lot of things from those days that I don’t remember. As they say, it would help had I actually been there. Am I saying that the suggestion had been made by someone, or someone in the chain, who knew of the conspiracy and that the suggestion was deliberate? You bet I am.