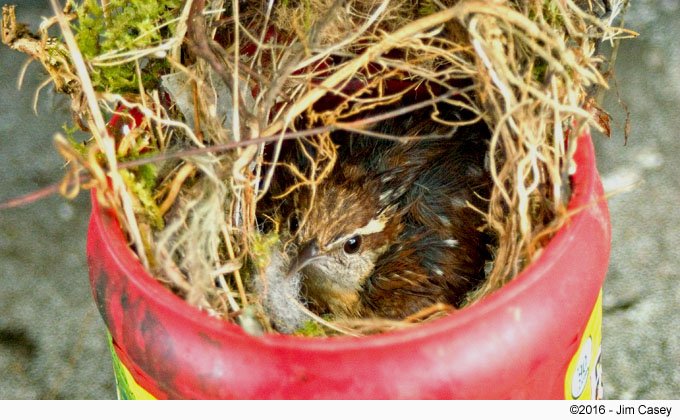 Bird found a readimade structure to pad her nest.

Many folks keep a few old coffee cans around the house to put small items in. As it happens, I had the one above, empty, outside on my open air patio on a small set of shelves last spring when the mother bird decided to take advantage of the readi-made structure. Tucked up inside the shelf, I hadn’t noticed until time came to attend to some chores that required moving the set of shelves.

As the weather was just warming up, I was also worried that my increased presence outside would hinder the little bird who I noticed flying inside and out continuously bringing back worms for the the freshly hatched chicks. I was also afraid that if I tried to move the coffee can condo to a new location away from my work area, the mother bird would simply abandon her chicks.

To my chagrin, I really had no other choice but to place the bird condo in another spot out front – but hopefully not too very far away. I watched for quite awhile after moving the nest, and finally I began to loose hope as the little bird didn’t seem to figure out where the new location was, or if she intended to resume her matronly duties.

Then… finally, I saw her sneaking around from the other direction and sure enough she finally accepted the new location of the coffee can condo and resumed feeding her chicks. I kept an eye on them for awhile and one day when they got big enough – off they went.