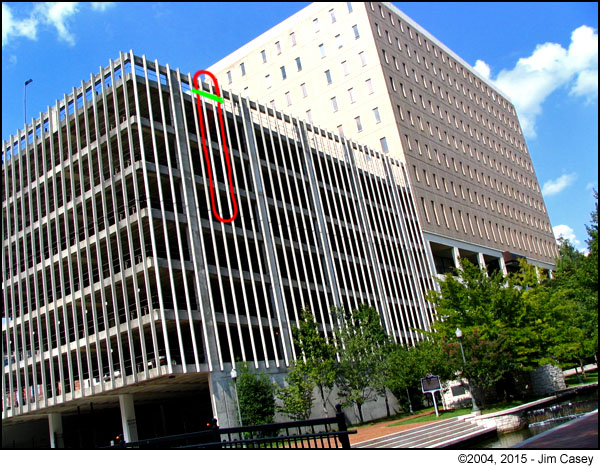 It’s been awhile, and although I’m not positive, I believe the incident described below occurred before I took this photo on Sept. 11, 2004. If my timing is correct, the two spires, indicated inside the red field, had already been replaced, and the park bench directly beneath them was already gone. The green line at the top indicates where the vehicle backed into the concrete spires. I actually took this photo from the same park bench where I was sitting when it happened.

This short story is a cameo from my life 10 or 12 years ago.

I was at the library downtown on a nice spring day surfing the Internet on their computers. When I was done, I walked outside and decided the fresh air and sunshine were just too nice to pass up and so walked over to Big Sprig Park located just a half mile down the road. Big Spring Park, for those who may not be familiar with Huntsville, is a slightly over sized patch of sidewalk green space in downtown Huntsville carved out to make room for the namesake “Big Spring” to flow from it’s headwaters beneath the First National Bank building through it’s “canal” into a half acre lagoon and then on through the city’s surface water drainage system to destinations further south.

The headwaters and canal are split from the lagoon by Church Street creating a cul-de-sac of sorts on the east side of Church Street that generally receives more detailed landscape grooming including fancy brick walkways, Gothic light posts, picnic tables and park benches. Where the Big Spring actually exits from beneath the earth through a stone wall and immediately underneath the old First National Bank building, is a poorly maintained fountain and a waist deep water pool to accommodate the numerous, mostly goldfish, that enjoy the cool refreshing water.

On this particular day I found the east side of the park oddly devoid of visitors and happily chose the most coveted of park benches to relax for a few minutes. The bench I sat upon is the one located right where the small walkway bridge crosses the canal from Spraigins Ave. into the park, immediately across from Huntsville Utilities and facing the Central Bank building parking deck.

Not really paying attention to much of anything, I was suddenly alarmed by what I instinctively thought must have been a small bomb. I don’t remember exactly when all this occurred, excepting that it was not terribly long after 911 and I suppose my sensitivities where somewhat tuned to the new reality of “everything has changed.” When I looked up, almost right in front of me, just across the Big Spring canal and immediately beneath the Central Bank parking deck, there was a cloud of dust and what I first thought was smoke rising into the air. Underneath the cloud were the splinters of what used to be a park bench. It had been flattened to meet with the fancy sidewalk pavers by several large pieces of concrete and steel. The largest pieces of concrete, which obviously had fallen from somewhere in the sky, where about 10 – 15 feet long, and were roughly 8 inches in diameter. Several smaller chunks of concrete, and protruding pieces of steel re-bar, also adorned the scene.

After first looking all around me – and I am not joking – for any signs of enemy aircraft, tanks, and/or listening for air raid sirens, I was able to make more rational observations and think for about 90 seconds in order to size up what exactly had happened. It didn’t take too long to see that the large elongated concrete “spires” had fallen from the exterior facade of the Central Bank parking deck. After a few more minutes, I was able to determine that a vehicle on the top level had become a bit disoriented and when attempting to turn around in the apparently tight space available, had accidentally backed a little too far in one direction somehow managing to do so in a spot where the back end of the car passed just underneath the main frame of the garage where his bumper then made purchase with two of the many concrete spires that wrap the facade of the garage. When he did two of the spires, that I would estimate to be 35 feet long and roughly 8 inches in diameter, immediately snapped off the sides of the building on all four levels where they were supposed to be fastened, and met with the park bench cum firewood pancake below. Each of the two spires that fell would easily weigh-in at several hundred pounds – I’d guess 500 to thousand pounds each.

The newly disintegrated park bench was one that I had sat in many, many times before. And yes, I did check right away to see whom, if anyone, had just died. Fortunately, because there weren’t really any other people in that area of the park at that time, and because that particular bench wasn’t usually anyone’s first choice, no one including me, was sitting there when the bomb went off. If anyone had been sitting in that bench, when the concrete fell, they would, unequivocally, and terminally, be dead. Although repairs to the garage were eventually made, the park bench never did reappear.

It took awhile longer, days or weeks maybe, for me to make additional observations and extrapolate what now seems painfully obvious. That parking deck is dangerous, extremely dangerous, and anyone who walks or drives near the three sides where the spires hang – there are sidewalks on two opposite sides and two roadways, in front and on one side – is taking their life into their own hands.

I say that because when you look a how the vertical spires hang around the garage, you can see that they are attached to each deck level by lag bolts or some other type of steel bar. When the car backed into the top end of the spires, you might expect that the top half would be damaged, or that a few small pieces might have crumbled away. But, what happened is the spires snapped loose on four different levels all at the same time, apparently because the steel fasteners were/are rusted through.

In short, a good breeze is just liable to blow some more of those vertical spires loose – if they don’t actually fall from their own weight. Each and every one is most likely being held in place by nothing more than a little bit of rust and the dust that has settled between them and the mainframe of the garage. Now, you may correctly say that that was more than ten years ago and nothing has happened since then, and then call me Chicken Little. But, I gaurandamntee you this much – you ain’t gonna catch me walking, peddling my bike, or driving my car, anywhere none too close to that garage. They say seeing is believing, and you’d believe too if it happened to you.

The bottom line: that garage is so dangerous it could not possibly pass a legitimate inspection and it should be cordoned off and torn down.