(The Onion – Not really, I should’ve said: “The Other Onion.” Either way, this one stinks worse than an onion.) 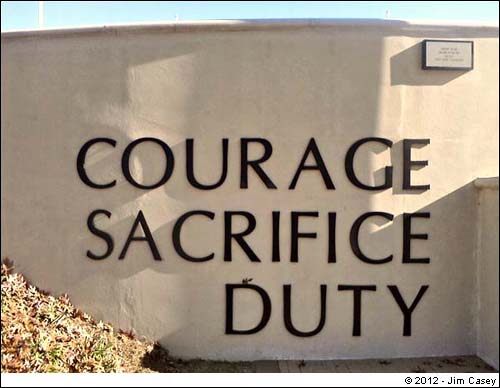 The artist and architect of Huntsville’s Veterans memorial seems to have left some room at the top of this area for the visitor to add a word based on their own impression. What word would you add?

The trouble with this media circus event is that the cheeky overshadows who is actually important. And, I end up asking what the hell country is this anyway?

Recall that General Petraeus was commanding General is Afghanistan when Terry Jones, the pastor of a small church in Gainesville, came up with a Koran burning scheme. Petraeus, lambasted the obscure preacher while saying at the same time he wouldn’t want to get involved in a a discussion over first amendment rights. Petraeus was only concerned that terrorists in foreign countries might attempt to kill American soldiers. Like, national and international pressure by top officials so stop the Koran burning isn’t tantamount to a threatening ultimatum and censorship. Terry Jones finally did surrender his constitutional rights and canceled his Koran burning even.

The juicy part, according to other media accounts (The New York Daily News), is that Petraeus actually attempted to stop another Koran even by Tampa shock jock “Bubba the Love Sponge.” Who said he was going to deep fat fry the Koran as a stunt. Jill Kelley emailed the Tampa Mayor saying Petraeus, and the then commanding General in Afghanistan John Allen,l and asked for her intervention to stop the Love Sponge from deep frying the Koran. He also subsequently canceled his stunt.

All this stuff really does make for good theatre, and yo gotta love southern humor. But, there are some pretty serious side effects to the whole shebang. Not only did Terry Jones and The Love Sponge surrender their constitutional rights, but in another incident where Korans were “inadvertently” burned at Bagram airbase, President Obama sent a letter of apology to Afghanistan President Karzai. As if the US should apologize for what goes on at our airbase.

The collateral damage of “make nice” to Islam, the religion of 911, is deep and enduring. Even giving the benefit of the doubt to those decent Islamics in the US who have no affiliation with terrorism, the message is” Islam is more sacred than the the United States Constitution; Military bullies can intimidate and deny constitutional rights – IN THIS COUNTRY – with impunity; the President rewards such behaviour with promotion, i.e. Petraeus to CIA director; and only the arrogance of a benign creme puff dalliance is sufficiently egregious to oust the already ready to retire fascist boor.

Those constitutional rights, unalienable rights, my rights and your rights, have been secured with the blood of tens of thousands of soldiers in modern times alone. No one wants anymore to die for any reason, but selling out those rights may turn out to be even more expensive and long lasting than it may first appear.

Don’t apologize for me, Mr. President. Instead, visit Arlington, look around at the headstones and apologize to them. Better yet, maybe for a change, you should keep your own mouth shut.