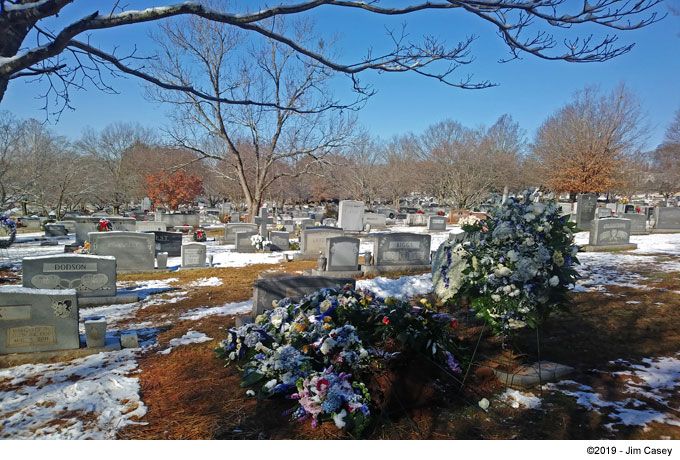 It was a dark and dreary day. Tuesday, December 10, 2019 started off wet, then got wetter, then got colder. I was sitting at home, working on the computer and waiting to see if the weather would break before funeral time. Forecasts said there would be a changeover from cold wet rain and sleet to snow around 3:00 in the afternoon. Services at the Mayfair Church of Christ were scheduled to begin with a public viewing from noon to 2:00 with a one hour service to follow.

I tuned in to watch, still waiting to see if the weather would cooperate. I wanted to cover the funeral of the fallen hero, but I’m not too keen on the steady rain that had been going on all day. As the services began on TV, it still was raining, but finally it started to lighten up a bit, and the changeover to snow began with just a few flurries. I like snow, and now I knew I would be able to cover the procession. I got my gear together and headed out the door at 2:45. I needed some time to find the exact route at Maple Hill and find the best vantage to take photos and video.

The public had been advised to expect traffic delays along the route from 3:00 until 4:00. That advisement turned out to run closer to 5:00 as the procession just kept going. Once I arrived near McClung, I found out that the procession would turn onto McClung and head to a site near the rear end of the the cemetery. This was important because there are also entrances off California into the front of Maple Hill and being in the wrong location could mean missing the images I came to get. 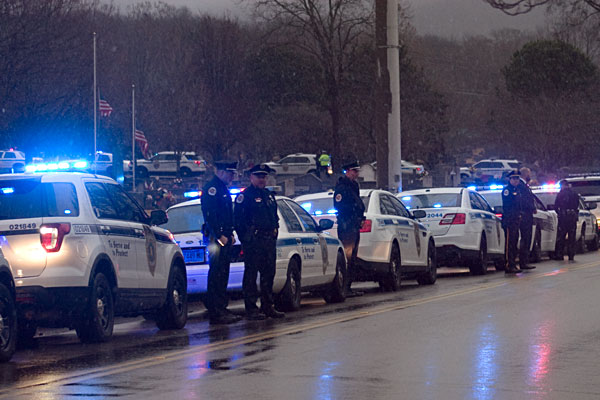 Law Enforcement await the passage of Billy Clardy's hearse on McClung Avenue on the south-side of Maple Hill Cemetery. 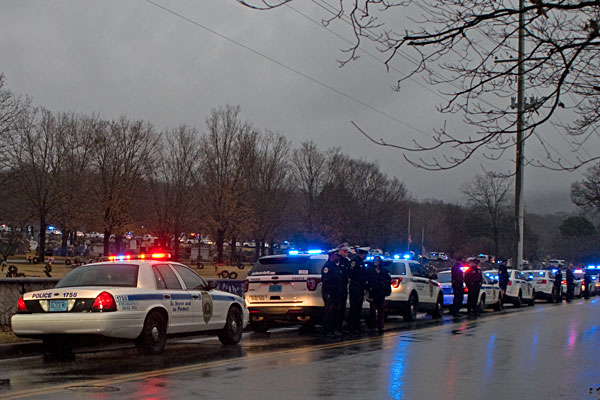 The vigil continues as officers are ready to come to attention while dozens of police vehicles are wrapped around to the rear nearer the grave site. 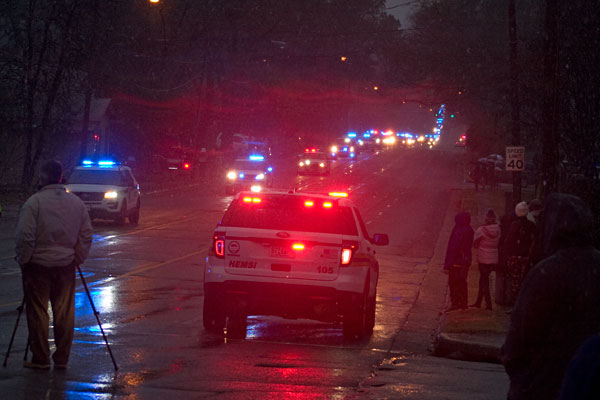 Looking South on California Street, this shot was taken after the two preceding photos, and after the hearse had passed through, showing the never ending length of the funeral procession. 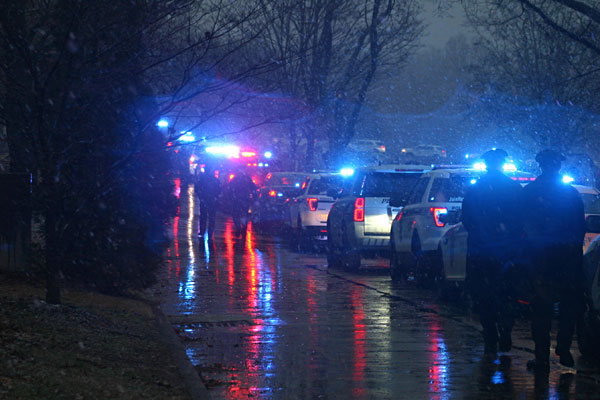 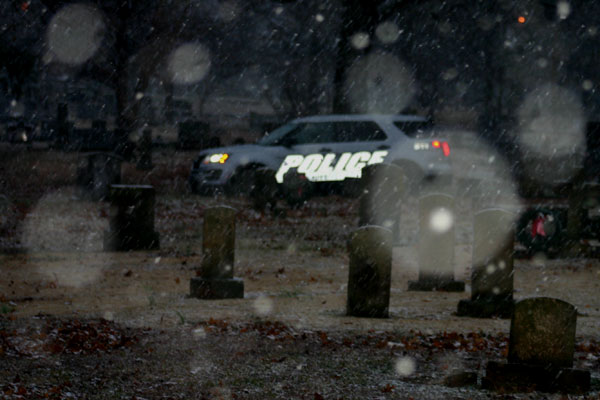 The camera flash accentuates the falling snow in this shot, which was already about a half inch deep in open areas.
SLIDE SHOW

Unfortunately, the light snow flurries gave way to sleet and light rain, alternating for the next hour. The procession probably left on time, but it took about an hour for the hearse to reach the location I had scoped out on McClung. Vehicles had been coming in for thirty minutes before the passage of Officer Clardy which occurred about 4:00. The procession continued. Finally it seemed to slow down around 4:30 and I decided to move around to the front entrances of Maple Hill to see if I could then head to the back to get some shots of the graveside service. When I got there, I discovered that police vehicles were now also entering through that gate and the road was filled up all the way from the back to the front.

At this point, it was getting dark, the sleet was sloppy and wet, and I lacked motivation to continue in the cold, wet, sloppy almost rain. I decided to leave. Almost as quickly as I made that decision, the snow started coming down again in blizzard like fashion, but it was still wet and not sticking to the roads. By the time I got home twenty minutes later, however, there was an inch and a half on the ground.

I got out of my dampened jacket, checked the news and started dinner. I can only imagine that the graveside service was probably just beginning or in progress at this point. So, while my heart goes out to the family for the loss of Billy Fred Clardy, I also know it was no fun standing in the cold and dark with wet snow falling as Officer Clardy was lowered into his final resting place.

Both the mainstream media and I have placed alot of emphasis on the number of law enforcement vehicles there were at the funeral. There were just so many it was overwhelming to see – maybe two or three hundred. There certainly were quite a few personal vehicles as well, but they were practically swallowed up by the police presence.

Since I hadn’t ventured to the rear of the cemetery to take graveside pictures during the funeral, I decided to head over that way the next morning as I was already to be in the area. Hence, the photo at the top of the page and the title of the article. At the grave site there was a young lady and a couple of gentlemen who were already leaving. She said she went to high school with Officer Clardy and helped me straighten some of the flowers for the photo. 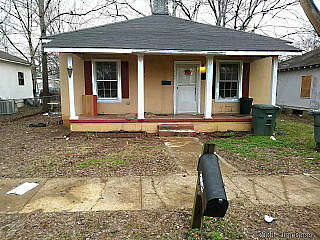 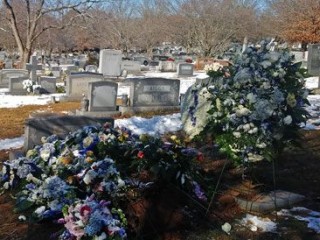 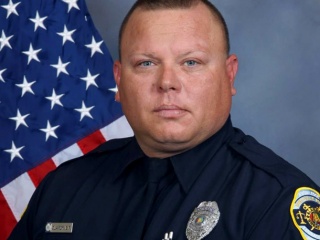