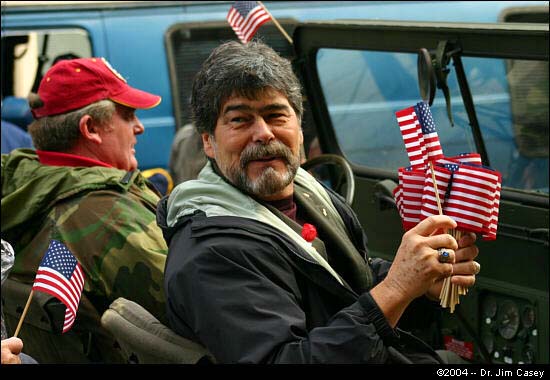 A
lthough I dropped the colloquial
moniker of “Dr.” some time ago as indicated on the photo credit, it
seemed to cause confusion, I sometimes wonder if a medicine man is
needed for our country when Veteran’s Day rolls around every year.

I sometimes hear someone say: “Happy
Veteran’s Day.” It’s an ambiguous occasion for sure. Because, so many
veteran’s and so many American’s do have so much to be happy for. And,
much of what America has to be happy for is in part due to the
sacrifices of veterans. But of course, there are so many who didn’t
come home, and so many who come home with enduring injuries, and so
the sadness of war remains – victory or not.

I respect and appreciate every veteran
who has served this country honorably and in good faith. But, these
days I often question the motivations of our wars. More and more it
seems to me our country is willingly surrending the values and
principles that have been paid for with so much blood. I don’t
understand that.

Almost as if to add insult to injury,
the City of Huntsville has waited many years to build a memorial to
veterans. So many WWII veterans have already grown old and passed
away. Even while the finishing touches are just now being completed,
the testament to valor and bravery, and independence and freedom, almost
seems to be a cheeky – “not really.”

It looks like rain tomorrow. So I
don’t plan to take any new photos of this year’s parade. Maybe I’ll do
an exposé of Huntsville’s memorial at a later time. It really is a
great site to see.