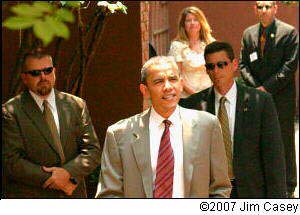 Barack Obama as he appeared at the Heritage Club while campaigning in Huntsville in 2007.

Some have suggested the world changed forever on 911. The Bush administration acted quickly, before the dust could settle, to confuse the American public and undermine the Constitution, to commission homeland security, empower big brother, and take control of your daily life. Diminishing your individual rights, liberty, freedom, and justice was accomplished while the nation was still reeling and in shock from the attack on the World Trade Center.

During that time the Internet revolution moved quickly and without the full focus it should have had while the nation was at war in search of non-existent nuclear weapons. Techno savvy leviathan multi-media companies broke the speed of light establishing unconstitutional information gathering, data sharing, and invasion of privacy.

In the hazy days since 2001, in a country whose original manifest declares it’s motivation to be the protection of the individual rights and liberty of all, the panicky national mind-set slowly accepted the indoctrination of socialism – at the expense of constitutional rights.

The republican party bosses, eager to narrow the margins on common people while increasing their own profit margins, maneuvered themselves out of the presidential election of 2012. The possibility of restoring the foundation and principles of the United States Constitution has diminished past the leaning column and is now firmly ballasted in the very unlikely column.

Barack Obama has been left to run the rope factory in a newly born socialist nation.

But, he doesn’t understand – he already ran out of the other guys money. Maybe with well meaning compassion, he will attempt to spread economic security through the ACA, bale outs, and benefits. With government involvement comes government regulation. And, the margins on your discretionary income will continue to narrow while Big Brother’s nanny state taxes you and decides how to spend what should be your money – in your best interest according to socialist doctrine.

The only winners in this election are the aristocratic industrial bosses and multi-national companies who continue to unfairly abuse and exploit modern technology and industrialism to affect what is essentially a monopoly on resources and wealth. The new socialist state allows them more control through individual, socialist, conformity.

Don’t blame Obama. The republicans sold him the rope factory – so he can create jobs.

“THOSE WHO DESIRE TO GIVE UP FREEDOM IN ORDER TO GAIN SECURITY, WILL NOT HAVE, NOR DO THEY DESERVE, EITHER ONE” – THOMAS JEFFERSON