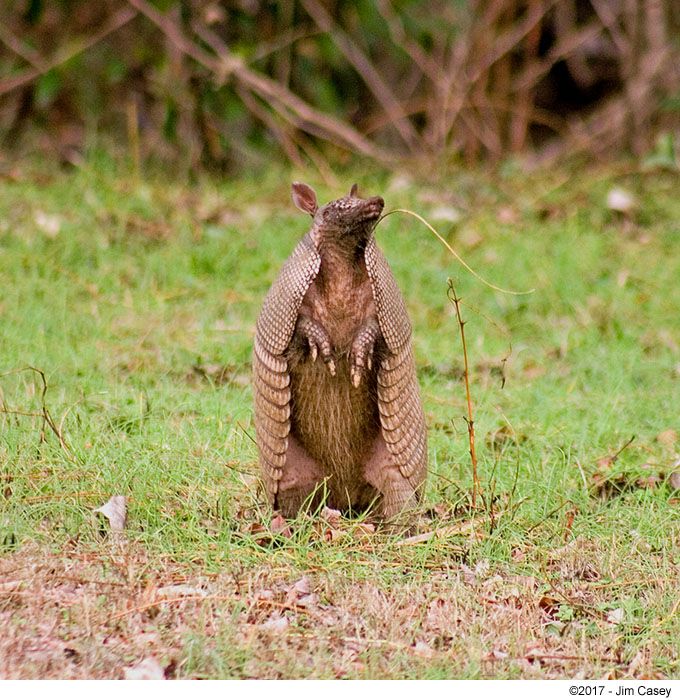 This armadilla was a bitch to photograph. She kept her nose in the dirt most of the time, finally, she turned my way and reared up to say hello. 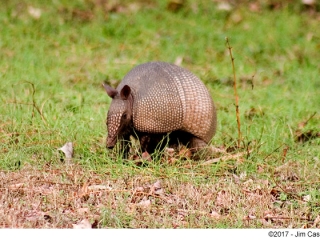 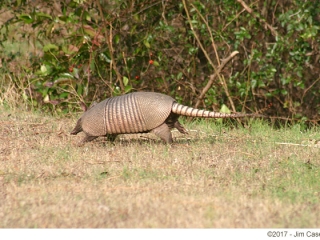 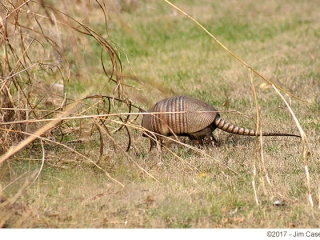 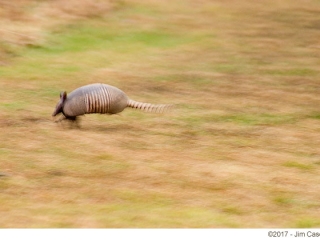 I have been pretty much an outdoors-man all my life, or so I thought, because when Miss February the armadillo showed up a few weeks before Christmas, I realized I had never seen a live armadillo more than one or twice in my entire life. And that was apparently lucky, not only for me but the critter as well, since most of the armadillo’s I’ve seen, which actually has been quite a few, are usually roadkill. Apparently, this is a well established phenomena for the “leathery” shelled creature because Wikipedia actually describes the armadillo colloquially as a “speedbump.” It seems the amiable looking creature has a habit of jumping straight up when surprised, facilitating a collision with the underside of the moving vehicle, rather than somehow moving to safety.

I caught this particular critter a few times last fall as she was moving along a line of grassy brush, apparently just going from point a to point b. She would quickly scurry away into the underbrush if I made any attempt to approach her. For awhile, that was all there was to it. Mostly, I would see her when I was arriving back home, and off she’d go. It was a few weeks after our first encounter when I started noticing some pretty serious divots in the yard, which I found to be inextricable. I hadn’t seen the armadillo milling around in the yard, and my only insincere explanation was that a rogue squirrel had become over exuberant in an effort to squirrel away nuts for winter. I knew this was likely not the case, because not only were many of the divots large enough to swallow two golf balls, but they were being left uncovered as well.

Finally, one afternoon when arriving home, I caught her ambling about the yard digging, apparently for grubs. As it turns out, the armadillo is skittish, but not quite so much as the adult groundhogs. After two or three attempts, I finally caught her where I would be able to get inside to the camera, and back outside to a vantage point that didn’t immediately scare her away. Even still, she’s a bitch to photograph. A near sighted critter to begin with, she kept her back to me, and her nose literally in the ground most of the time. Only two or three times did she turn around and rear up, nose in the air to smell around, and very quickly plop back down to continue digging for grubs. Out of about a hundred frames, I was lucky my own timing was quick enough to get this one shot while she was upright.

Since our last photo session, I haven’t seen little Miss Armadillo. I guess she was aware of my presence, and although they have poor eyesight, I imagine she detected my scent, and maybe could hear the sound of camera shutter. I can assure you, however, she is still around. I have never seen a critter make such a mess in a yard before. Everyday, there are freshly dug holes, almost worthy for planting a vegetable garden. And so while I am quite ready for Miss February to move on to greener pastures, I strongly advise, in spite of my Souper Bowl reference, that you DO NOT ever eat, make soup, or even handle an armadillo. As it turns out, again according to Wikipedia, armadillos are a health hazard that can transmit leprosy to humans.

Even still, they are truly interesting, if somewhat pesky critters.