After his historic shuttle flight as the oldest man in space, John Glenn returns to his Huntsville space home for a hero's welcome.
This page has an associated TOCC TV cover

John Glenn American space hero, by now you’ve heard, died last week on December 8th at the age of 95. I noted the event with sadness as the news media offered their eulogies, epitaphs and condolences. Being a bit busy and somewhat distracted, however, I barely took time to think about the fact that I have featured John Glenn on TOCC TV not once, but twice. The first column I published was in October of 1998 while Glenn was in space on his historic Space Shuttle flight, and the the other was in January of 1999 upon his return and visit to Huntsville for the parade and hero’s welcome noted in the photo above.

When it dawned on me after a little while – it has been 18 years after all – that I not only have photos of John Glenn, but had also published the the two columns, I had to go looking in the off-line archives to find the material since I have’t yet reposted those articles which appeared essentially during the first year of publication when TOCC TV was still called Casey’s Chronicle. Alas, I’m not reposting that material now because they are both complex from an html standpoint and include old java scripting, popups, animations, and background sound, not to mention out-of-date links to external sites, and frankly, my sense of humor during the launch of the Internet was largely about all those bells and whistles and would fall a little flat at this point.

I also found that the photos I used at that time were not very well edited. So, I had to go looking, not in the digital archives, but in the old-fashioned 35mm print dump trunk to find and rescan the photo above. It’s one of the same that I used then, but I am much more adept as editing photos, and the Internet is much more adept at handling an image larger than 15kbs. So, forgive me John Glenn, but your passing rings nostalgic on more than one level.

John Glenn was the first American to orbit the earth, and the hero’s welcome and parade above were in honor of his historic shuttle flight in October of 1998 when he became the oldest person at 76 to fly in outer-space – while he was still a sitting US Senator. Godspeed John Glenn, you will be missed. 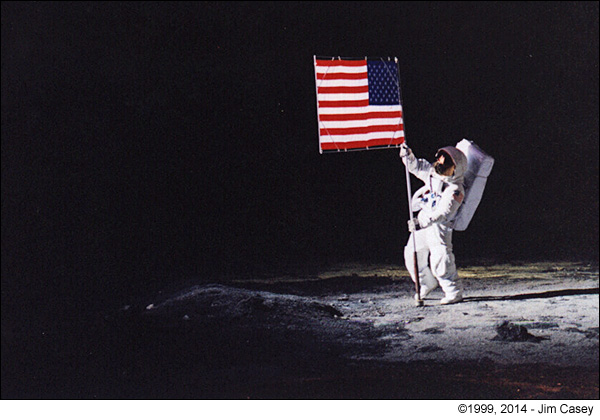