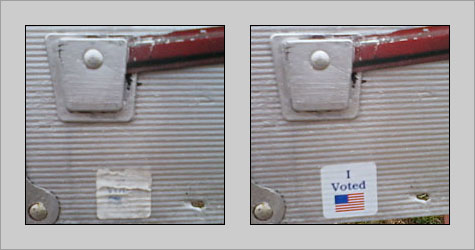 My new found ritual was to be lining up my "vote" stickers across the mailbox. But when I got home from voting I found the old sticker from last springs primaries hadn't weathered too well. Funny the things you don't notice on a day to day basis. So, I went ahead and placed the new one over the old. Doesn't really seem right though. Like Snoopy flying his WWII fighter, I intended to keep score with each new sticker. Maybe I can put a coat of polyurethane on each when newly added.

Well, the dust has settled, and the Super Moon still rose into the sky, and short of an unlikely revolt by the Electoral College delegates, whereby they would surely casts their “unfaithful” votes for me – Donald J Trump is to be the next president of the United States of America. I’m not terribly surprised and I’m certainly not shocked that he ended up winning the election. I somehow knew intuitively, it just seemed the likely conclusion to a seemingly unlikely election.

I might have titled this column “The Empire Strikes Back.” If I did that, however, it would only be in good natured jest, but frankly, I already have more misgivings about Mr. Trump than I expected I would, and so I already wonder how far the “good natured” part of the equation is going to go. Because he controls both houses, he potentially has an enormous amount of power to make enormous changes… if the rank and file continue to fall in line behind their new leader.

During the campaign, I kept expecting him to moderate to center to pick up more of the disenfranchised democrats, but he never did. Then, I figured he’d simmer down some when he began the transition. He hasn’t. In fact, his appointment of “hardliners” to his cabinet has been more encompassing than I expected, and that leaves me feeling concerned about how hard his liners are going to become once he takes office, the posturing ends, and the dirty work begins.

The good news is, he’s only got four years and if he wants four more he will have to temper his extremism before then. I suspect the democrats will come back in 2020 fully intending to make corrections of their own. Assuming they have learned some lessons about counting unhatched eggs and correct themselves first. The “alt-left” didn’t exactly moderate and the truth is a bunch of folks not unlike myself wouldn’t have voted for Hillary if she were the only choice on the ballet. You didn’t have to like Trump to vote against Hillary. Not that I’m predisposed to voting for democrats, I’m not, but Trump has gone so far right, W Bush is beginning to look like a centrist. WTF?! Did I actually say that?

Knowing my contempt for W Bush already, you probably see this my disclaimer coming. I DID NOT VOTE FOR DONALD J TRUMP !!! True to the TOCC TV endorsement, I voted for ME, Jim Casey, and still consider myself to be a moderate conservative – although I’m already beginning to feel like the left shifted to surround me while I was just standing still. Either way, you can rest assured that me and TOCC TV are ready to skewer Mr. Trump as deemed necessary, and while I regret the old saying, “all news is good news,” I do look forward to doing my part to debunk and enlighten anyone with the wisdom to spend time watching TOCC TV.