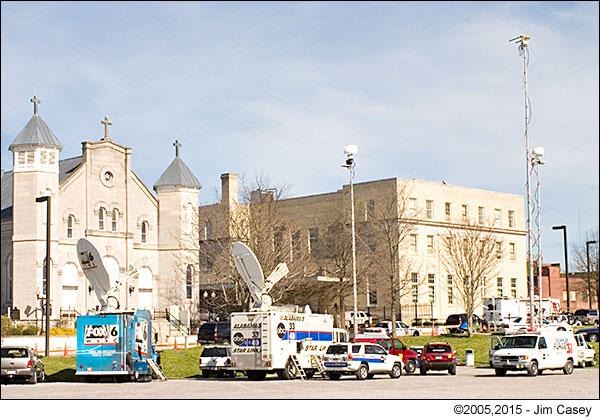 Former Madison Police officer Eric Parker isn’t the only notorious “Eric” to appear at the Federal Courthouse in downtown Huntsville (on the right). This photo shows the scene in 2005 when Eric Rudolph appeared for a pretrial hearing. The media vultures who had gathered on this day may generally be responsible for the deification of police officers, like Eric Parker, leading to the attack and injury of the Indian Grandpa.

Eric Parker, the former Madison, Alabama police officer who slammed an Indian Grandpa to the ground leaving him partially paralyzed, was given a mistrial last week on federal charges of deprivation of civil rights under color of law, a felony. The prosecuting attorney in that case has flatly stated that he will retry the case. If convicted on the federal level, Parker would face up to ten years in prison. This week he is being tried on the lesser charge in Limestone county of third degree misdemeanor assault. If convicted on the misdemeanor, he could face up to one year in jail and up to $6000 in fines.

In my recent column “Darren Goforth dTIRRd By Miles & Miles & Miles | Pigs Don’t Learn” I suggested that the Kangaroo Court system exacerbates the problem of the “judge and jury” mentality of already arrogant law enforcement. By that I was actually making a reference to the brazenly corrupt municipal court judges that automatically convict anyone based on the fact that they have been arrested. It’s a system that, in Huntsville, has functionally become everything constitutional jurisprudence isn’t supposed to be. The municipal system works like a small town with a brand new Interstate where they can put up a ridiculous speed trap. Arrest, incarcerate or fine. Fines make money. And, the police officer quickly learns that he can do no wrong. When he makes an arrest, he gets a conviction automatically, and maybe fills an expected quota.

While this phenomenon probably cultivated Eric Parker’s knee jerk attitude, his mistrial illustrates a different but related problem. For there to be a conviction or an acquittal, the jury has to reach a unanimous decision. In Eric Parker’s trial, one or more moron’s refused to convict what was obvious at face value. Eric Parker used excessive and unnecessary force leaving the Indian Grandpa partially paralyzed. It is impossible to understand how a rational person could not find him guilty. Unfortunately, there are idiots who believe that their personal agenda is more important than legitimate due process. The convoluted thinking seems to usually come from one of two perspectives.

The first says that Eric Parker is a police officer and no matter what he does, it’s ok. The moron thinker may be a former cop, or a veteran, a racist, or maybe has some other kindred affinity – and feels the need to stand in solidarity with the criminal activity of a creep like Eric Parker no matter what. The second moron thinker is more likely a municipal employee, a school teacher, or someone else whose real motivation is an attempt to lessen the potential for liability by the municipality. The second moron thinker has no interest in justice or solidarity either way, they just want to make sure their next raise, or the taxes they or their family has to pay goes in their favor.

Both moron thinkers are short sighted. Part of the problem with militant cops like Eric Parker is that they are not worthy of solidarity to begin with. They think of themselves as the keepers of justice and constitutional values and call themselves the “militia” while in truth they undermine and diminish everything this country and the constitution stands for. In fact, Eric Parker would more correctly be looked upon as a gang member who saw an opportunity to demonstrate his bravado and his gang loyalty, maybe as part of indoctrination, to his less experienced partner. In the longer haul, we are beginning to see that hero worship of cops is quite expensive after all, i.e. Ferguson and Baltimore, and likely to become even more expensive as time goes on.

Both moron thinkers have been cultivated and encouraged in the last several years by legislative bodies that have made law enforcement “untouchable” by passing stiffer sentences for crimes against cops, etc. The media follows the stories, but I wondered when I first started seeing this trend, why it was that media pundits didn’t seem to be able to find the editorial words to lambast what I thought was an obviously detrimental trend in policy. In fact, even after the public outcry in the last year, the media still finds it difficult or impossible to knock the deified police officers off their high and mighty pedestals.

Maybe the media’s learning curve is a little slow along with the jury who couldn’t find a way to put Eric Parker under the jail last week. Fortunately, Eric Parker will have yet another day in federal court. And to my way of thinking, if he gets a year on the misdemeanor, and ten years for civil rights deprivation, it won’t be enough for the injuries he inflicted on Sureshbhai Patel – who seems to be a fine man and a good Grandpa.