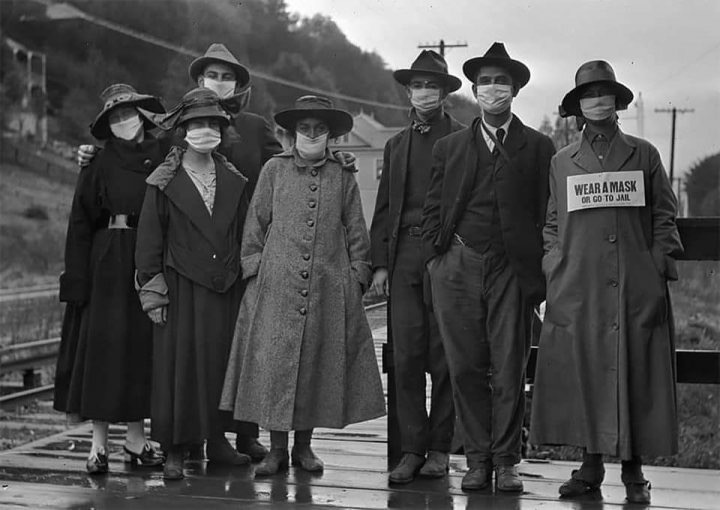 I lifted the photo above from my old buddy Stephen Kings Twitter account. Good natured fellow, must be my old buddy because most of my life reads like a horror novel. In deference to the gentleman whose usually liberal political perspective I value but don’t usually agree with – he might agree with my conclusions after I analyze the photo, but probably wouldn’t condense it down the same way. He doesn’t state its origin.

However, searching the photo on Google it can be found in several historic archives disussing the Spanish flu of 1918. Many of those references are interesting reads revealing that over 500 million people became ill, 25% of world population at that time, and 50 – 100 million people actually died.

What’s especially interesting is that much of the U.S. didn’t have all that many cases during the spring but then it hit very hard during the fall. Is the China Virus comparable to the Spanish Flu?

The very disconcerting answer is it very well could be. If you look it up, you will find major media outlets that say it isn’t. The problem is those outlets seem to have gone almost suicidally out of their way recently to discredit their own integrity. Further, their analysis is based on the “first wave” last spring showing the abatement of the Corona Virus, which actually makes it look like the same pathology as the Spanish Flu. The fall “second wave” either hasn’t hit or is just now gearing up.

Now, look at that picture again. They are wearing their masks alright… and standing shoulder to shoulder. I suppose they were well meaning but, the aggressive admonisions to wear masks may have been successful to that end but apparently wearing masks was an abysmal failure at stopping the spread of the Spanish flu.

Alabama Governor Kay Ivey today issued a statewide update to the Safer at Home order requiring masks in all public places with a few exceptions. Only a moron would fail to see the numbers are being gamed to create the worst possible public impression at this point in time. It is a political manuevre designed to justify reopening schools, which is mostly an appeasement to the AEA and the NEA.

Schools cannot reopen with a realistic expectation that students will social distance no matter how hard they try. It will not happen. Hence, the fallacious expectation – just like with the Spanish flu – that masks will be enough to protect.

Kay Ivey and the State of Alabama, and much of the nation are playing Russian roulette not just with the kids, who may be asymptomtic and not become as ill, but with everyone else they, the faculty, and staff come in contact with after they go home at the end of the day. Which is about 2 degrees of separation from every goddambody in the country.

The masks are potentially a lethal false sense of security for a political agenda. Education, as the saying goes, is fine as long as it doesn’t interfere with your thinking. A few months of education just isn’t all that important at this point. Social distancing is what works, and what it appears they didn’t do in 1918.