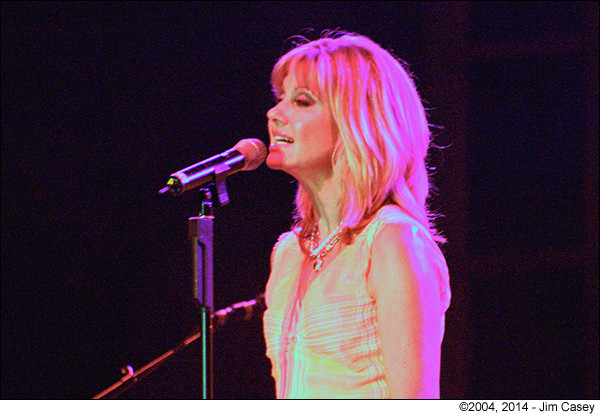 Here’s another golden oldie I fished out of the vault. I took this shot of Olivia Newton John at the Big Spring Jam in Huntsville in 2004. It’s hard to believe it’s been ten years ago.

Ms. John was a bit of a cantankerous subject, but I had fun trying to capture a good shot. I defend my photographic skills first by pointing out the poor lighting, shooting at 1600 iso, and although the frame shows a close up, I was using a 300mm zoom from nearly the last row in a full crowd.

I say she was difficult, because it always seemed that just as I was about to get the shot I wanted, maybe with a little better light, she would lope off to a different part of the stage. Her timing was impeccable. After a while, I realize she was toying with me. Gee, little ol’ me! So, I just kept following her poses, and just kept on shooting frames.

Finally, it must have dawned on her, that I was shooting digital, and that I had an unlimited roll of “film” in the camera. If she was waiting to see the look on my face when I ran out of what might have been a roll of 36 frames at best – she was disappointed. When it hit her, she stopped and just stood there for a longer than normal minute, hands at her sides, and a shocked look on her face. I got her!

Now, she wasn’t really being ugly, how could she beautiful as she is, and I had gotten a couple of decent shots in the mean time. She was just being a good sport and having a little fun. But, that was a time when many newspapers and magazines still hadn’t switched to digital cameras. I had gotten one of the first generation Canon digital SLRs, and as I say, I think she was a bit surprised to find her cat and mouse game had finally met a match.

Well, she’s from “down under.” Australia, you know, was founded by Westerners as an English penal colony. No wonder she’s a little chiselly, she must be the progeny of some pretty unscrupulous characters! Still, she should lighten up some. It’s not like she has to buy her clothes from K-Mart.