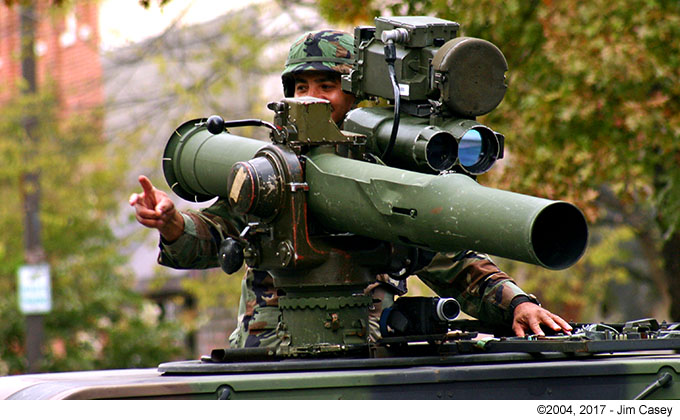 Smiling faces and waves to friends punctuate a local heros parade. A sharp contrast to the realities of actual combat.

Gayle King, talk show moderator on CBS This Morning asked Ivanka Trump two days ago about whether she and her husband Mr. Cozy are “complicit” with Daddy Donald Trump, she said, “I don’t know what that means.” Maybe Ivanka didn’t see it coming, but Ms. Kings question seems to be a double entendre that suggests her own complicity in last nights imposition of gun boat diplomacy on Syria.

I thought I already knew what it meant, but after considering all the events and implications of last nights missile strike, I decided I needed to look up the pesky little word for myself. After looking it up, I’m now less than sure whether the word intends to imply culpability for an event, or simply an association or participation in an (wrongful) event. I looked it up in two places, offline, and both are abridged. It seems to me, however, that the definition of the word complicity is also deliberately an abridgement unto it’s own complicit definition. In truth, the whole situation is what normal people generally end up referring to as a “cluster f*ck.” But, there’s more to it than that.

Trump’s launch of 59 Tomahawk Cruise missiles onto Shayrat airfield in Syria was, at face value, a stern warning about the unacceptable use of chemical weapons by Syrian president Bashar Assad the day before yesterday. Causing relatively few casualties and inflicting a great deal of material and equipment damage, it has been reported that the missiles were timed to all hit within a minute or so. Shock and awe is the term used previously in similar campaigns.

So, why the flippancy and cynicism? Well, the confluence of events portends upon complicity which seems to also suggest culpability – somewhere on the mobius cluster f*ck. Most of the way through Donald Trump’s whirlwind first one-hundred days, comes a culminating state meeting with China’s Xi Jin Ping, apparently deliberately timed to coincide with the 100th anniversary of the United States entry into WWI. Now, I don’t ascribe to this kind of thinking in general, but that’s what some others would refer to “asking for it.”

The bigger issue on the table, however, is really North Korea and it’s quickly evolving capability to launch a nuclear warhead that would hit the US mainland. No doubt, Assad got his message, but the most important message is to Kim Jung’un. Donald Trump is prepared, without the consent of congress, to make a “snap” decision to retaliate against North Korea should it become necessary. When there’s only half an hour to counter a nuclear attack, I don’t think there’s really time to call a meeting.

That, however, seems to imply that orchestrating the use of chemical weapons – so that Mr. Trump could assert his resolve – was also “complicit.” Pretty tricky business since Russia is also involved in Syria. Heretofore, Russia and the US have been playing footsy trying not start a nuclear World War III with each other in Syria. But, given the allegations of Trump’s coziness with Russia, could it be said that Trump’s people acted in concert with Vladimir Putin who acted in concert with Bashar Assad to use the barbaric weapons – leaving Trump a window and no choice other than to reply?

Understanding the entire event – with Xi Jin Ping standing in the nearby shadow – as being orchestrated with Kim Jung’un as the ultimate target; the comparison to Obama’s lack of response in 2013 simply doesn’t apply. North Korea has now become a dangerous and potentially immediate threat to millions of people in the United States. That wasn’t true in 2013. Trump’s statement that if Obama responded then, ostensibly in exactly the way Trump now has, it would have been a big mistake is essentially still the case. Mr. Trump has responded at the appropriate time to send Kim Jung’un a very important message that wasn’t relevant in 2013.

The use of chemical weapons in Syria has been a dirty, nasty, barbaric business and I’m one that doesn’t believe in “blood sacrifice” to start with. As far as I’m concerned, two percent snuff is still 98% too much – whatever that means. What I do know for sure is that Kim Jung’un has the capability, or very soon will, to summarily obliterate hundreds of millions of lives in the United States – and to quite literally wipe cities like New York completely off of the map. North Korea continues to be defiant against the International community – how strong is too much when major American cities are at stake?

HOWEVER I find the lead up to the whole thing to have been a bit too snarky, and notice the same shock and awe occurring on the domestic front at the same time.

Just another day before, and under the cover of darkness, Trump quickly signed the bill ending broadband privacy. This sets the stage for McCarthyism and fascism unheralded in US history. This was a big mistake.

Also in the immediate meantime, Jeff Sessions has moved forward to remove constraints and enhance militarizing of municipal police departments – while BLM and other grievances have gone unanswered.
Next Sessions came just short of declaring war on the legal marijuana that many veteran’s, like the ones already in Syria, would find helpful and even curative for battlefield injuries, along with countless others who would benefit if from nothing more than a sensational relaxing sunset.

Sessions is setting the stage to further impose and expand a southern style plantation business model. The chip on his shoulder and the agenda in his back pocket, or the back pockets he is in, prevents him from seeing that the cash crop is the best thing a free and unencumbered people could be planting – and that that would enhance the quality of life for most people all the way around. Jeff Sessions is ultimately demented, out of touch and dangerous (and complicit).

International politics is a whole different protocol because you’re dealing with other people and cultures who don’t necessarily share the values, laws or government, that we hold dear in the United States. I don’t know who started it, but they are all complicit. On the domestic level, I don’t like complicit, or cluster f*ck either one when it comes to ram rodding legislation and policy under the cover of rush, rush and shock and awe. To be president, or an elected official, of all your constituents whether they voted for you or not, should have the opportunity to review and contribute to the discussion in regard to policy changes.

It should also be noted, by the way, that each of the 59 missiles fired last night cost around $1.5M each for a total economic disbursement of near $100M. They will all have to be replaced. To which Mr. Trump might complicitly reply: “jobs, jobs, jobs.”

And finally, if writing this article make me complicit – damn the torpedoes – Jung’un got the message.