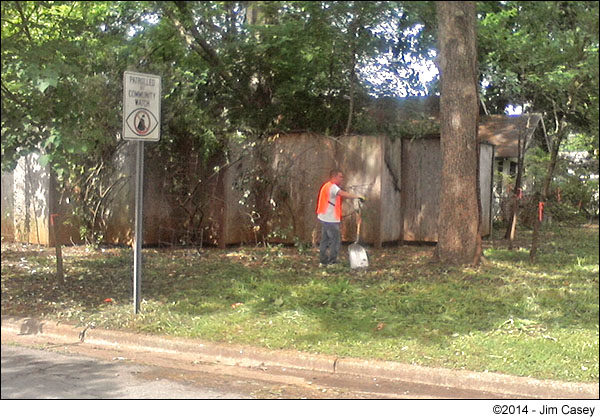 If there’s one thing a city employee can be counted on to do, it’s lean when there’s time to clean. In this photo taken today, the city employee seems to be padding the charges that the City of Huntsville has vowed to present to James Hessler for clearing his yard, after he lost a years long battle to maintain his property au naturel. According to Hessler: “They are invading my personal privacy.”

Fascists that they are, City of Huntsville employees have swooped down upon James Hessler’s property on Pratt Ave., in the Five Points district of Huntsville with shovels, rakes and bow saws and chain saws cutting the foliage out of Jim Hessler’s yard after he lost his years long battle to maintain his property au naturel. 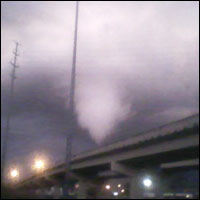 A rogue tornado in Huntsville’s Five Points district in 2010 reeked havoc with disregard for law and order.

I pass by the property frequently and fail to understand the complaint. One assertion is that it’s an eye sore, and another that it’s a health issue. Both notions seem to lack veracity since just a couple of miles further up the road, on the slopes of Monte Sano, there are dozens of homes where yard maintenance is virtually impossible, no one has died from typhoid, and residents clamor to claim ownership of property that is considered to be the most aesthetically pleasing in Madison County.

Now rumors are flying. In just the last two weeks, there has been a house fire, and an arrest for drugs and guns in the same Five Points district. In just the last few years, there have been numerous incidents in the trouble prone area. Meth labs have been busted, prostitutes have been stiffed, vehicles broken into, and the price of a half gallon of milk has sky-rocketed at Star Market while at the Family Dollar store, the peanut butter nutty bars are sometimes out of stock. 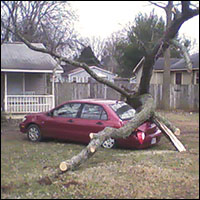 There were even reports of a rogue tornado that sliced through the area just a couple years ago. Alot of damage was done by this tornado with complete indifference to law and order. Cars were damaged, rooftops were left without shingles, doors were torn from their hinges, and trees were broken from the top and left lying lifeless in the streets blocking traffic as people attempted to go to work and school the next day.

The scuttlebutt on the streets is that City and State officials have had it. This mayhem must be stopped! Reports at this time indicate that a contingency of armored vehicles has been commissioned from Redstone Arsenal with backup to arrive from Ft. McClellan within the week. Residents will be asked to move, and if they refuse, their homes will be bulldozed while they are still inside.

When asked for his comment on this situation, Huntsville Mayor Tommy Battle is said to have uttered: “THERE MUST BE RESPECT FOR ORDER AND THE FUROR!” That was all I heard him say…