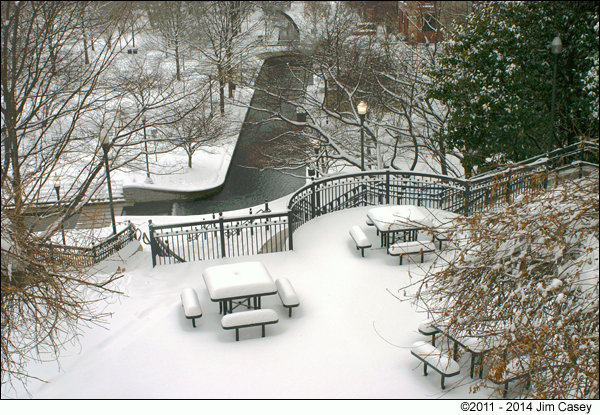 ICEBERG! I had to trudge through miles of arctic tundra, snow, blizzards, and sub-freezing temperatures to get this shot of an iceberg in Big Spring Park. But, it was worth it. I’ve always figured that if temperatures drop as low as 10°, then I am entitled to snow. Not this year, at least so far. It seems to me that there’s some sort of breech of contract in the equation. No snow in Huntsville so far this year. Fortunately for me here at Casey TV Station, I took this shot in 2011 when we got a pretty respectable blanket of snow.

It’s been recently reported that Jeff Bezos intends to start shipping you things from Amazon even before you place your order. He figures he can read your mind based on the things you’ve ordered in the past, and … PRESTO MAGICO! He can go ahead and send you your order. Next time I’m standing there in Big Spring taking snow shots of the picnic tables, I’ll be expecting one of his drones to fly in with Chinese takeout, pizza, or maybe fried chicken. Tough deal though, I’d have to clear the snow off the table to eat. Shucks.