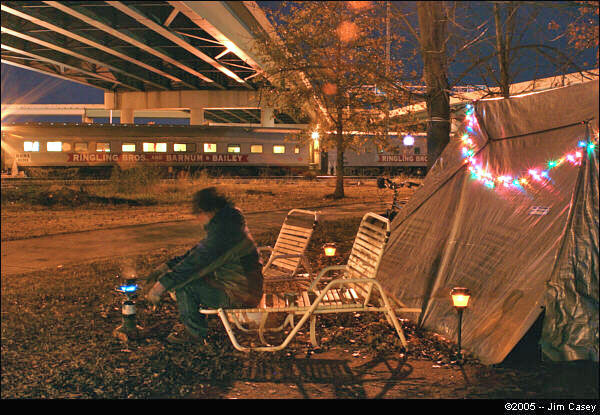 The Great White Elephant
Homeless camps dot the City of Huntsville. Some in plain view, but most hidden out of sight under bridges and overpasses, or tucked away in unlikely spots behind brush and trees.

The impending move of the Downtown Rescue Mission has sparked a mean spirited and hate filled public debate. Some people apparently believe that some other people are less than human and must be relegated to an official caste without basic human rights, less dignity that a dirty wet dog, and nothing more nutritional to eat than “scooby snacks.”

Particularly malicious and vitriolic responses have come from some of the community that is now slated to host the homeless mission. Little wonder. First Stop, a so-called homeless advocacy run by the notoriously liberal Interfaith Mission, and at least partially funded by the City of Huntsville, has frequently run full page ads in the Huntsville Times assuring everyone that all homeless people are drug addicted, psychopathic, gimpy pirates, or demented veterans of war. Huntsville police weigh in too by arresting the same two dozen haggard crack whores working near the mission over and again in rotation. And, don’t forget the omni present incantations of “neighborhood advocates” who want to paint a sufficiently bleak picture, however distorted, in order to drive the mission from their little corner of West Huntsville.

For openers, it should be asserted that homelessness is a complex problem. First Stop always fails to mention other aspects of the story. Homelessness has steadily risen in parallel first to the advance of feminism, and subsequently to illegal immigration — hot button issues that the Interfaith Mission seeks to quell in deference of their own political agenda. And, I’m quite certain there are a lot more prostitutes in Huntsville than the relative few who are apparently selectively prosecuted on Seminole Drive.

Add to that politically organized child molestation in public (and private) schools deliberately designed to “pre-dispose” the ones who are deemed to be misfits, unresponsive to Ritalin, or perhaps — enter Jim Hudson and the real underlying motivator for dispersing the mission located next to his Lowe Mill property — just not genetically purdy enough. Some call it human laundering, some call it eugenics, some call it genocide. Call it what you will, it boils down to a microcosm of holocaust. That makes it illegal. It isn’t constitutional. It isn’t Biblical. It is, in that context, inherently criminal.

Interestingly enough, the problems in West Huntsville aren’t going to be solved by the move of the DRM. The Salvation Army will still be located in the area, several low income housing projects are in the area, and there are still seedy night clubs in the area. That having been said, the new digs on Evangel Drive aren’t exactly surrounded by upscale neighborhoods rivaling the Hamptons. In truth, most of the surrounding area is somewhat run down and low middle class at best. In fact, if anyone is upset, it might be the ones who fear competition from the new “girls” in the ‘hood.

The most likely upset, which apparently is somewhat cloaked, probably comes from the UAH collegiate community. (SHhhh, don’t mention they’re in the same ’hood.) I have personally witnessed a belligerent attitude toward non-students at UAH. The fact is, UAH is a public institution with an open campus and library. Where visitors happen to live shouldn’t enter into the equation. Never-the-less I see arbitrary discrimination on the horizon.

“You mean to tell me that homeless people have rights!” Indeed they do, assuming they are legal citizens to begin with. Of course, to hear First Stop tell the tale, homeless folks are automatically wards of the state and their guardianship. Their aforementioned advertising obviously intends to further mislead the public into believing that all homeless advocacy is subject to their jurisdiction, along with their subjugated clients. In fact, they offer little or no help to homeless people who choose not to surrender their constitutional rights to their arbitrary authority. I would even suggest that their propaganda campaigns have already created a virtual system of false imprisonment for many homeless people.

In a city where there are enough Churches to “adopt” all homeless people on a one per Church basis, very few if any appear to be involved in homeless advocacy outside of First Stop’s attempts of domineering control. Jesus must surely walk somewhere within the City of Huntsville, because the propagators of brotherly love are apparently too busy attending the wedding feast to bother with those in need of personalized assistance. Ooops! Rule number one: “Be though not personally involved.” To hell with all that mushy love in thy heart stuff. If you’re homeless and live in Huntsville you probably gonna have to seek salvation in a non-personal way rather than through the faith of Jesus in your fluttering bosom.

The latest twist in the much belabored move of the DRM is that the City Council is said to now be considering tougher anti-vagrant ordinances. That along with meetings suggested between DRM Director Darwin Overholt and Huntsville Public Safety officers to facilitate beefed up security at the new location, increased police patrols in the new neighborhood, and plenty pastoral green space — behind fences — at the new campus, will insure that the mission prisoners, er, I mean residents won’t be going anywhere in a casual manner. Of course, rhetoric and conjecture do not always manifest themselves in the end the way they start out sounding. Even still, all the warning signs are there. The Darwin’s DRM Beagle is dead and is set to evolve into an illegally imprisoned pit bull.

Oh, the remembrances. But, make no mistake, the situation in Huntsville is not a time capsule for reminiscing. It’s a recipe that responsible civic leaders would never have allowed to assimilate at one venue. It’s a recipe for long term trouble and the dissolution of constitutional and democratic liberty.