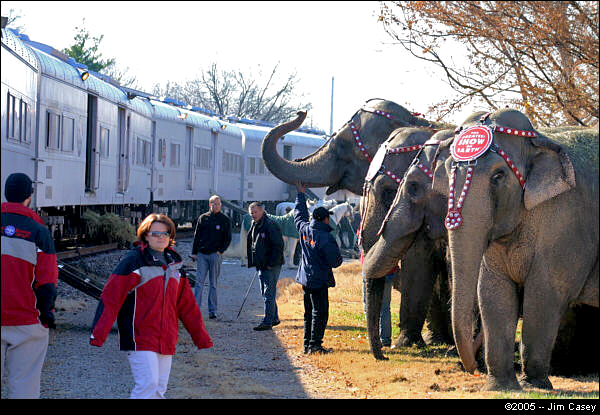 When the circus comes to town, the elephant walk is always my favorite. The pachyderms are getting ready for their trek in this file photo from 2005.

“E” is for elephant! For some reason, not as though I never did anything fun as a kid, but I never did go to the circus. Well, not the real circus. I did see some farm animals at the fair, and one time I went to one of those real cut rate circuses where the south end of a donkey and an unhappy clown are the biggest draws. But not until I was grown did I ever go to real Barnum and Baily Circus.

The acrobats, the clowns, the tigers, and the elephants. Now, not to underestimate the fabulous high wire acts, and the daring of the ring master. But without the Barnum and Baily circus, I wouldn’t really know what an elephant looks like. It’s not the same on TV as it is in person.

Today, the news media announced that Barnum and Baily will end the elephant acts by 2018. Lead by PETA, People for the Ethical Treatment of Animals, it seems that there has been a lot public outcry about how the circus treats the elephants. Either way, Barnum and Baily has decided that the expense of fighting lawsuits and the bad publicity has become too expensive.

Make no mistake about it, I love those elephants, and I would never want one of them to be mistreated or unhappy. But the fact is, the reason I love those elephants so much is because I got to see them in person – for free too! I took the photo above in 2005 after they arrived by train and were just about to make their walk to the Civic Center. It doesn’t seem that those pachyderms are very unhappy, and they don’t appear to have been abused. In the wild they are accustomed to social order where one of the big ones benevolently rides shotgun over all they rest. Taking orders from another elephant, or a ring master, would seem to be a part of their natural world.

It seems to me that a lot of people love elephants, and by extension all other wild and exotic animals, many near extinction, because there is a circus and because there are zoos where we can see them and they become real. The conservation and protection of all those magnificent animals depends on public awareness and concern for them. Animals we never see, are animals we never worry about. I can’t answer all the questions about animal treatment and happiness, but it seems to me that PETA is doing more harm than good. And besides, what’s a circus without elephants? Maybe a prelude to a world without elephants?