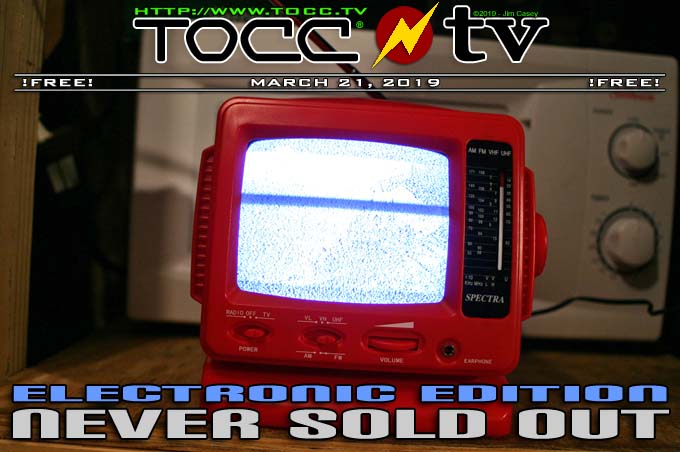 What's black and white and read all over?

A Major Change For TOCC TV

las, it is time for yet another major change at TOCC TV. Beginning right now, I will be discontinuing the splash page that so many do seem to enjoy. This is for several reasons. Mostly, by placing the contents back under the primary TOCC TV index page, it will significantly raise the website profile for visitors who drop in from search engines. The improvements in Search Engine Optimization (SEO) will drive more visitor awareness of all the other fine content TOCC TV has to offer.

There is also a confluence of social and cultural changes at this time including what seems to be a final winding down of printed media to a minimum plateau brought about by the advent of the Internet. Frankly, I miss so many of the hard print copies that are no longer available or practicable, and we may be at a point where that transition is stabilizing and might actually improve. Of course, this media settling is far more subtle than at that point when newspapers started dropping like flies as websites multiplied exponentially. It truly is the finale of an era.

In that same light, one of the preeminent Internet Platforms, WordPress, has recently embarked on a new branch that you may have heard about called “Gutenberg.” Gutenberg is a new system of editing posts and pages in the Content Management System that has certainly received mixed reviews, including from myself. There is even a new fork off WordPress called Classic Press that many Content Mangers are migrating to.

There is a fundamental undertow that seems to have precipitated this decision by the WordPress Core developers. More and more often, I find that many of the plugins in the “more than 50,000” WordPress repository are being abandoned and are no longer being maintained. The Internet marches on, and the reality that “the party is over” is simply soon to become a “force majeure” for anyone who works with WordPress on any level. Exactly how WordPress and the Internet continue to evolve remains to be seen, however, it appears that we are entering a whole new phase.

There are also political and social changes occurring that are arguably on the same wave of the technology and information revolution that actually began with radio, then TV and now the Internet.

There is one final reason for making this particular change at this time. That is, I’m running out of material for the Splash page and don’t have the time or equipment to reengage in photography in a manner I was able to some years ago. Eventually I will, but for the time being, I’m simply moving the Splash page to it’s own niche, where it already has a home on TOCC TV. It will continue to be sort of an “it girl” page, but perhaps on a less frequent basis. If you have bookmarked the contents page, it will automatically redirect to the tocc.tv index page.

So, my “Newspaper TV” is undergoing some changes and continuing to evolve for the better. Over the years I’ve added weather content, which is also undergoing changes recently, stock market information and tickers, puzzles and word-games – and I’m still reviewing additional sources that can provide consistent and quality content. Stay tuned to my Newspaper TV – TOCC TV – and thanks for watching.